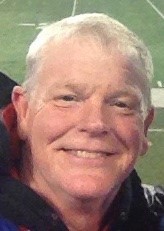 John Duffy Gallagher, age 61, of North Ferrisburgh, Vt., died on Friday, April 2, 2021. John was born in Jersey City, N.J., on June 30, 1959, to proud parents Agnes and John Gallagher. Young Finnegan, as he was known, had the gift of gab and an entertainer’s spirit. Four sisters, Maura, Marykate, Colleen and Erin, followed, and John became an adored big brother and second father.

He went to Catholic grammar school, where Sister Sheila taught him to love grammar, a love he never outgrew and one which was transformed over time into a love of literature, dance and music. His tastes in literature ran to the classics, while the dance was all Fosse, all the time. As for the music, it was diverse, starting with Johnny Cash and Bob Dylan and blossoming into a true love affair with the Grateful Dead, whom he followed throughout his life.

John attended Saint Michael’s College in Winooski, Vt., where he developed a close group of friends and a lifelong love of poetry, literature and philosophy.

Having cut his teeth on the Watergate hearings, John became an avid consumer of news and political commentary. When, in the mid-1980s, the White House was no longer in the hands of a Democrat, John was distraught. But he quickly recovered when he learned that that there was a socialist, Bernie Sanders, right under his nose in Burlington, and he dedicated many hours to working for Bernie and the progressive ideals he represented.

Working with and for Bernie led John to dedicate much of his working life to supporting labor unions and fighting for rights for workers. He worked tirelessly to organize the nurses’ union at the University of Vermont Medical Center, persuading where possible and taking no prisoners when necessary. During the last year of his life, when he spent some time at the medical center, he was surrounded by nurses he worked with and for to ensure they received the compensation and dignity they deserved. And they remembered him and repaid him in kindness after kindness.

In 1990, John welcomed his first child, his beloved daughter, Cara. A proud papa, John and Cara would dance while he hummed Stevie Wonder’s song “Isn’t She Lovely” over and over. Less than two years later, John’s second child, Luke, was born, and finally there was another boy to round out the family. He and John spent many an hour watching their beloved New York Giants through good years and bad.

John made it a point to be involved in his community, most particularly as a coach. Known as “Jelly Jar” to many of the Burlington kids, he helped them to live the B.A. way, developing skills and, more importantly, character along the way. And he continued this work professionally, coaching for 11 years at Charlotte Central School.

With the luck of the Irish, John was blessed to find the love of his life, Elizabeth, better known as Betsy. She charmed him with her beauty, wit and kindness. With their dog, Dewey, they made a lovely home together for well over a decade, finally marrying in March 2020. They were perfect together — funny and caring — helping each other through difficult times but finding joy always. And when Cara gave John the great gift of grandchildren, Liam and Riley had an opportunity to love and learn not only from Poppy but from Moppy, as well.

John was preceded in death by his parents, Agnes and John Gallagher, as well as beloved aunts, uncles and cousins too numerous to count.

A private ceremony commemorating John’s life was held for the family on Monday, April 5, 2021. A celebration of his life will take place in June, in honor of his and Betsy’s shared birthday, when vaccination makes it safer for all to travel and be together in person, as we are now in our hearts.

In lieu of flowers, memorial donations may be made to Vermont Public Radio/Broadcasting, 365 Troy Ave., Colchester, VT 05446.