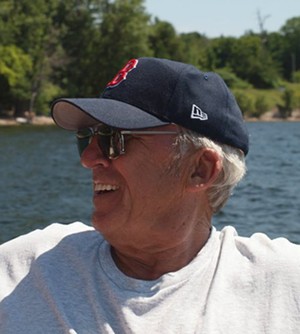 John Carlton Durham, a life long resident of North Hero passed away Monday, April 13, 2015 at his North Hero residence with his loving family and friends by his side.

Born September 2, 1935, he was the son of the late James Ernest and Mildred Hazen Durham. Carlton was born and raised in his family’s farmhouse, where he grew up farming until joining the service. Carlton served his country overseas, returned to the States and married his sweetheart Carole “Sis” Story and continued his service with the Vermont Air National Guard for 20 years.

Carlton was very dedicated to the North Hero Fire Department for over 50 years, he helped build the Oman Station in the village during his summer years as a young boy and served as Chief for many years. In addition, he was owner of the Harbor Store, worked for the Town of North Hero and worked in construction until retirement.

He was a member of the Order of the Eastern Star and Masons (Columbus Lodge).

Carlton enjoyed being on the water, mowing lawns, watching sports and most importantly loved spending time with his family.

In addition to his parents, he is predeceased by two brothers in law, George Story and David Story as well as his sister Carolyn Baumuller.

There will be no calling hours; however, for those who would like to attend,

a graveside service will be held at the Jerusalem Cemetery in North Hero on Saturday, April 18, 2015 at 11am. A small reception will follow.

In lieu of gifts, donations can be made in memory of Carlton to: Grand Isle Rescue, c/o Debbie Benson and/or Visiting Nurse Association of Vermont.

Arrangements are under the direction of The Kidder Memorial Home, 89 Grand Avenue, Swanton 05488.