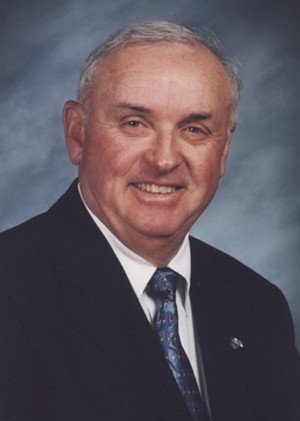 John Edward Andrews, Lt. Col. U.S. Army (retired), died on November 3, 2022, at his home in South Burlington surrounded by his children. He was 83 years old. John was born on November 20, 1938, in Englewood, N.J., to Evelyn Stiles and Hildegard (Henschke) Andrews. As the youngest of three children, John was taught service, the joy of music, community responsibility and a strong work ethic — values that would shape and steer him for the rest of his life.

John left the New Jersey suburbs to attend the University of Vermont in 1956. It was at UVM that John met his best friend and the love of his life, Jane Templeton Wood. They would be inseparable for the next 62 years, passing away less than a year apart.

John loved UVM. He was active in ROTC and served as the president of the Phi Delta Theta fraternity. He spent his summers working at Grand Teton National Park and attending U.S. Army Basic Training to become an armor crewman and then Officer Candidate School, where he earned a commission into the Army Corps of Engineers. He also took a semester off to sail around the world in the Merchant Marines. John graduated with a degree in economics in 1961.

John and Jane were married on April 28, 1962, in Schenectady, N.Y., and initially settled in Essex, Vt. John worked for Aetna Insurance before starting his lifelong career as a sales representative for the Lever Brothers Corporation, retiring in 1993, and as an officer in the Vermont National Guard. John was a charter member of the Essex Rotary Club and enjoyed playing adult-league hockey, skiing, golfing and boating.

In 1968, John was promoted to captain in the Vermont Army National Guard and was simultaneously deployed to Vietnam as the commander of the 131st Engineers, where he served for 18 months. John was very proud of the men in his unit and their service in the central highlands of Vietnam. While in Vietnam, he fought to keep the local Indigenous peoples (the Montagnard) safe, as well as his own unit, "borrowing" construction material from the depot at Cam Ranh Bay to build bunkers and a village that withstood many enemy mortar and rocket attacks. John also instituted a program to ensure that every member of the unit learned to read and earned a GED while they were there. When he returned, John was invited to meet with president Richard Nixon at the White House and subsequently received a Bronze Star for his service in combat, but he was most proud of being able to bring every member of his unit home safely.

In 1974, inspired by the men in his unit, who were mostly from Underhill and Jericho, John moved his family into a "fixer-upper” on Pleasant Valley Road in Underhill — with a beautiful view of Mt. Mansfield — where he and Jane lived for 36 years. John often conducted the 1812 Overture or the "Hallelujah" chorus at peak volume during dinner. He enjoyed every minute of his life with his family in his mountain home — mowing the lawn, shooing squirrels (and bears) out of the bird feeders, building dams in the river, and skiing at Underhill Ski Bowl and Smugglers' Notch.

John was active in the United Church of Underhill in the choir and at the Harvest Market, where he could be found at the clutter barn or at the grill. He was a proud member of Hanaford Volunteers Fife and Drum Corps for over 25 years, and he and Jane marched in parades across the country with their children. John loved music, community and parades.

As enthusiastic travelers, Jane loved to plan trips all over the world, and John loved to videotape every minute of them. They also explored North America, from Mexico to the Yukon, in their RV, eventually settling down as winter campers at MacDill and Patrick Air Force bases in Florida and summering in Vermont.

John had a great sense of humor and outlook on life. He often said “Life isn’t easy,” but then he never let the struggles of life get him down. This was the attitude that kept him going the last six years of his life. He was a warrior. He had incredible will to live and to not leave his family. Despite what the doctors told him, he kept going.

A celebration of his life will be held on June 24, 2023, 11 a.m., at the United Church of Underhill, with interment to follow in the family lot in Underhill Flats Cemetery, where full military honors will be accorded this Vietnam veteran. In lieu of flowers, donations can be made in his name to Rotary Club Charities of Essex, P.O. Box 8466, Essex Junction, VT 05451, or to the United Church of Underhill, P.O. Box 265, Underhill, VT 05489. Please visit awrfh.com to share your memories and condolences.