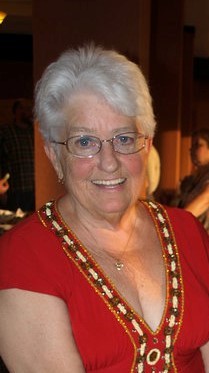 Joann Moulton Stanfield passed away at her home on October 22, 2019, to join her beloved Bob. Joann was born on November 22, 1940, in Marietta, Ohio, the daughter of David and Grace (Morrison) Moulton, who were officers in the Salvation Army, and the younger sister of her much-adored brothers Arthur and Alan. As officers, her parents moved often with their family to various ministries. Joann and her brothers would eventually work as camp counselors at Ashford Hills Salvation Army Camp. In 1955, at the age of 15, Joann met a fellow counselor and friend of her brothers who would become the love of her life. They were married on June 11, 1960, at the Brooklyn SA Citadel by her father, David Moulton. They would build a life and support each other unconditionally over the next 55 years, until his passing on September 28, 2015.

After marrying, Joann and Bob moved to Cambridge, Mass., where Joann supported them by typing papers for students while Bob pursued his PhD from Harvard University. Upon graduation in 1963, Bob accepted a position at the University of Massachusetts in Amherst, where they expanded their family. In 1969, they moved to Vermont with their three children when Bob accepted a position at the University of Vermont. Vermont would become their forever home. Joann worked as a full-time mother and part-time nursery school teacher at St. Paul’s Cathedral in Burlington, where the family had begun going to church every Sunday.

In 1974, Bob and Joann went to see a live performance of How to Succeed in Business Without Even Trying at the Flynn Theater by a newly started theater group called Lyric Theatre. They were two of only 200 people enjoying the show in a 1,500-seat theater. Sitting there in the theater, they had no idea how important this theater group and the Flynn would become to them. After Bob was cast in the second show, Gypsy, by Lyric, Joann decided that she wanted to have as much fun as he was having and was cast in their third show, Pajama Game. They would continue to perform in numerous shows over the years. Upon joining Lyric in 1975, they made new friends whom, 44 years later, they still called friends … and many joined them in 2010 to help them celebrate their 50th wedding anniversary. They opened their home over the years to the cast and crew for parties during the rehearsal process, as well as a place to warm up after caroling on Church Street during the Christmas season. During the early years of Lyric, they were the location for many a strike breakfast at 5 a.m., after the set was struck following the final show and the Flynn was turned back into a movie theater. They were widely respected in the Lyric community as JOBOB productions, when Bob decided he wanted to direct and Joann was his producer for six shows — some of which sold out that 1,500-seat theater! As one Lyric member said upon hearing of her passing, “Well, it will definitely be impossible to get cast in a JOBOB production now!” Before his passing in 2015, Bob told Joann that when she got to heaven, she should make sure she entered from downstage right, as that is where he would be waiting for her.

Since live theater was new to the Burlington area in the ’70s, a ticket booth was set up in a closet of the lobby of the Flynn Theater, where Joann began her career in ticket sales. She would volunteer her time standing in this closet with a cash box, a calculator as a register, and a large shelving system — created with cubicles for all the rows in the Flynn — that would hold the tickets. Eventually, Lyric would be a major supporter in the creation of the Flynn Center for the Performing Arts, where a real ticket office now is located. Joann holds the record for longest-running continuous volunteer as the ticket chair for 40 years, from 1976 to 2016, without missing a single show. She and Bob both served on the Capital Campaign Committee for the new creative space, and she helped cut the ribbon at the official dedication of the building on Green Tree Drive in South Burlington in 2017. The Joann Stanfield Ticket Window is located there. She could always be found twice a year sitting in K1 and K3 with Bob or her granddaughter Victoria on opening night of a Lyric show. When she could no longer get backstage to see Lyric friends, they would come out to the audience to give her a huge hug either before the show or during intermission. The outpouring of love and tributes of Lyric friends of 40 years during the days following her death have meant so much to her family. Both Bob and Joann were honored recipients of a “lifetime membership” with Lyric Theatre for their years of dedication.

Joann’s experience creating and chairing the ticket committee for Lyric would eventually lead to a career as the ticket manager for the newly created UVM Ticket Store. Joann worked for more than 20 years in the lobby of the old UVM bookstore, managing work-study students at the university and helping to expand the ticket store to what it is today. Upon her retirement from UVM, Joann and Bob were able to take her dream vacation to Italy. She and Bob — along with her brother Alan and his wife, Yvonne — traveled to England, as well as to her mother’s homeland of Scotland. When Joann wasn’t vacationing in Myrtle Beach with her family, she loved to take cruises; she visited almost every island in the Caribbean and took an Alaskan cruise.

Joann has been a dedicated member of St. Paul’s Cathedral, where she served on the vestry committee, helped with the wreath fundraising project and sang with the choir. For many years, she gathered every few months with her church friends, whom Bob always referred to as “the ladies who lunch.” She cherished those friendships, especially in this last year, as Rebecca and Maureen always checked in with her or provided rides to her so that she continued to feel connected as her health declined.

Family was always the foundation of who Joann was, and she was so proud of her children and grandchildren. She especially loved watching her granddaughter Alyssa perform as an actress, singer and, especially, a dancer. Joann is survived by her daughter Kathleen Stanfield Richards (Chris Murphy) and their children Christopher and Nickoli Stanfield; her daughter Cheryl Stanfield Zajan and her daughters Victoria and Alyssa Zajan (Ben Hiller); and her son Paul Stanfield. As an only daughter, she is survived, through her marriage, by her sisters Mary Moulton, Dorothy Stanfield and, most especially, Yvonne Moulton, as well as brother-in law Don Gibson. She will be missed and loved by many nieces, nephews and cousins. She had a very special bond with her niece Charlene and nephew Kevin Moulton of Kentucky, who began visiting her every summer after the family vacation in Myrtle Beach that began back in the early ’70s with her parents, Alan’s family and, eventually, Art’s family. Every week she would send out a mass email to family titled “Yo From Jo,” letting them know all the family news. Knowing that Joann was ready to reunite with her beloved Bob made it easier for the family to say goodbye. Joann was also predeceased by her son-in-law Mark Zajan in 1997, her brother Arthur Moulton in 2005, her brother Alan Moulton in 2017, her sister-in-law Joan Gibson in 2010, and her brother-in-law Theodore Stanfield in 2019.

The family would like to thank the Residence at Quarry Hill for their wonderful care of our mother over the last year, as well as Jen with the Bayada Hospice Team in the last few weeks. Mom formed many friendships with the residents of Quarry Hill, where she was fondly referred to as the “Giraffe Lady,” due to her love of giraffes. The family would also like to thank Angeline Ali, who showed us just how much she loved our mother by her amazing care and thoughtfulness during the last few months. You will always be a part of our family. Mom had been in and out of the hospital over the last few months, but we feel blessed that with their help she was able to be home when the time came, knowing she was loved and that her family would take care of each other when she was gone.

Visiting hours will be held from 4 to 7 p.m. on Friday, November 1, at Corbin & Palmer Funeral Home, located at 71 Pleasant St., Essex Junction. A memorial service will be held on Saturday, November 2, at 11 a.m. at St. Paul’s Episcopal Cathedral, 2 Cherry St., Burlington. In lieu of flowers, donations can be made to Lyric Theatre, 7 Green Tree Drive, South Burlington, VT 05403. Arrangements are in the care of Corbin & Palmer Funeral Home, corbinandpalmer.com.