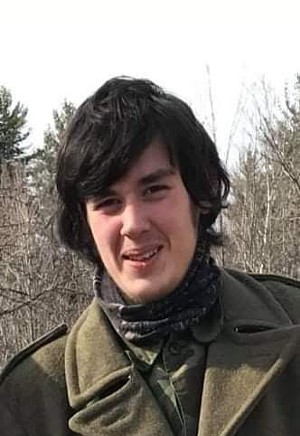 Jeremy Nick Michael Silva, born in Las Vegas, Nev., on July 12, 2002, arrived in Vermont in July of 2020 to meet in person his best friend of five years, Jolon, whom he had initially met playing a popular video game, Fallout: New Vegas. Jeremy experienced much loss early on, losing his mother, Lucy Silva, at the age of 11 and his dad, Nick Salazar, at 14. He was cared for by his maternal grandparents until he embarked on his journey to New England at the age of 18.

Jeremy was immediately embraced as a son by Jolon’s parents, Melissa and Steve Marden. Jolon’s mother was officially made next of kin after a medical emergency, and she did much to help him in times of need.

Jeremy’s unique presence and intensity left an impression on people who met him. His dry and absurd humor was endearing, and he danced when joyful. He had a nonintrusive way of being able to educate and engage people. He loved to discuss world history and foreign cultures. He held a particular respect for the military history and culture of Japan.

Jeremy arrived in Vermont with hardly a change of clothes, a suitcase full of books and about a dozen Criterion Collection films. Religion was also of great interest. At some point in his life, Jeremy was handed a Bible to read. He read three versions, and he went on to read the Koran, the Tibetan Book of the Dead and other sacred works.

In the fall of 2020, Jeremy met his great love, Althea. Jeremy had never been happier, and it was mutual. Due to circumstances during COVID-19, the move-in decision Jeremy was offered by her household in December was all-or-nothing; he graciously accepted. Jeremy and Althea were given three seasons completely in love and rarely apart. He learned how to get a woodstove going and how to love and be loved. They had begun to chart out their future together.

Tragically, Jeremy's life ended just before reaching summer by a fateful accident on June 19, 2021. Jeremy Silva touched the hearts of many people he met on his journey. He will be remembered fondly, and his spirit will continue to influence those who knew him. He is forever in our hearts. Godspeed.

Jeremy is survived by his loving grandparents; his fiancée, Althea Ellis, and family; his best friend, Jolon Marden, and family; his friend Armon; and many other friends. He would have wished for contributions in his memory to be donated to Wikipedia, practically the only reason he would ever think of his phone. A memorial gathering will be held on Thursday, July 1, 6 p.m., at Pocket Park in Montpelier.