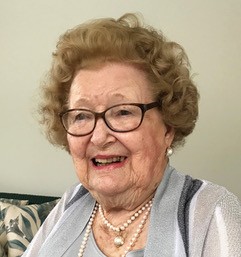 Ruth passed away peacefully in her sleep at the age of 102 on January 3, 2021, surrounded by her immediate family in Duxbury, Vt.

Ruth was born in 1918 in Saskatchewan, Canada, during the Spanish flu pandemic. Her father was a bank manager, and her mother was a schoolteacher. Ruth had two siblings, Helen and Gordon.

Ruth overcame many difficult challenges during her lifetime, starting with her turbulent childhood. After losing everything during the 1929 Depression, her parents divorced and the children were separated, growing up with different relatives. She gained independence, a sense of responsibility and maturity at an early age. Ruth met her future husband, Robert “Bob” Smith, while skiing just before he left for the Navy during World War II. Her adventurous spirit came out when she decided to join the war efforts. She was accepted by the Mechanized Transport Corps to become an ambulance driver in England. Ruth showed incredible bravery transporting wounded soldiers from ships in the night amid buzz bombs and inclement weather. Ruth and Bob were married in Warsash, England, in 1942.

Ruth and Bob had three children. Jillian Smith was born in England in 1944. Their second child, Janis Smith, was born in Canada four years later. Because doctors were not paid unless they were present at the birth, the nurses held the baby back until the doctor arrived. This caused Janis to have a stroke in the womb, resulting in permanent developmental delays. Ruth’s third child, Patricia Smith, was born four years later in Canada.

Ruth’s business career began as a sales clerk in Morgan’s Department Store in Dorval, Québec. She then got a job as supervisor for the lingerie department of D’Allairds, a chain of women’s clothing stores in Montréal. Her keen business sense came to light after she increased the company’s sales by 34 percent. Robert Connolly, then president of D’Allairds, and Ruth felt they were the perfect team in business and fell in love. They each divorced their spouses and were married in 1972. Ruth and Robert grew the company from 30 to 121 stores across Canada. Ruth worked when women were not treated equally regarding status and pay. She put a crack in this glass ceiling when she opened her own factory under the D’Allairds brand and appointed the first woman factory manager. Marks & Spencer of England purchased D’Alliards, and the chair of Marks & Spencer, Sir Marcus Sieff, voted Ruth onto its board of directors, as the first woman to hold that position.

Ruth was motivated by the needs of others, and her desire to care for Janis was a great inspiration in pushing her to excel in business beyond her expectations. Ruth and Robert purchased 69 acres in Duxbury, Vt., and built a new home for Janis and her care providers. Ruth’s youngest daughter, Patricia (“Tish”), married an Italian chef, Antonino “Tony” DiRuocco, and their focus changed to helping them build a restaurant. In 1978, Ruth and Robert purchased an 1820 Vermont farmhouse with a detached barn in Waterbury Center. After two years of renovations, Villa Tragara Ristorante was born.

When Robert passed away, Ruth wanted to meet new people and went to the local bridge club in Waterbury, where she met Gordon Johnson. For the past 27 years, Ruth and Gordon have been close companions, sharing their love of cards, travel, common friendships and family.

A gambler at heart, Ruth was a shrewd and successful investor making her money in the stock market. She believed that if you have the talent of making money, you should use it to the best of your ability to help others less fortunate. She regularly donated to the food bank, organizations for holiday toys for children, and several other organizations that help those in need.

Ruth survived two pandemics, and her remarkable life inspired all who knew her. A realist, Ruth was spicy, generous, intelligent, witty, down-to-earth and enamored with politics. She was a tiger — determined, confident, trustworthy and frank. She lived her life to the fullest, and she did it her way! Ruth was dearly loved and will be terribly missed.

In lieu of flowers, please send donations to your local food bank in Ruth’s name. We will celebrate Ruth’s amazing life at a time when it is safe to congregate. To send online condolences, please visit perkinsparker.com.