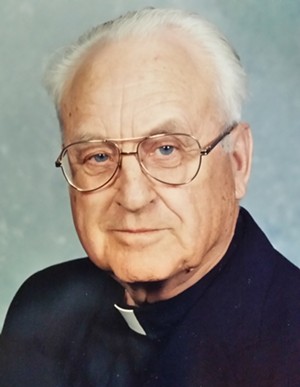 Father Jean Paul Laplante, age 93 years, a priest of the Roman Catholic Diocese of Burlington since 1950 died late Friday evening August 29, 2014, at Our Lady of the Meadows in Richford.

Born on November 14, 1920, in Chicopee, Massachusetts he was the son of the late Jean Baptiste and Rosa (Lemoine) Laplante. Father Laplante attended St. Charles Seminary in Sherbrook, P.Q., St. Thomas Seminary, Bloomfield, Connecticut and St. Paul Seminary, Ottawa, Canada. He was ordained to the priesthood on June 3, 1950, by Bishop Edward F. Ryan at the Cathedral of the Immaculate Conception in Burlington.

His priestly ministry began at Notre Dame, St. Johnsbury (1950-1952). He also served at Holy Angels, St. Albans (1952-1959), and St. Anthony, Burlington (1959-1961). His first pastorate was at St. Cecilia, Washington (1961-1965). He also served as pastor of St. Louis, Highgate Center (1965-1981) and St. Thomas, Underhill (1981-1991). Father Laplante was granted Senior Priest status on June 19, 1991, but continued to assist in parishes throughout the diocese, especially at Holy Angels and in the Lake Champlain Islands. Most recently he was serving as Chaplain of the Ave Maria Home and Our Lady of the Meadows in Richford celebrating Mass daily for the residents.

His Diocesan responsibilities included membership on the boards of the Vermont Catholic Tribune and Rice Memorial High School. Father Laplante was involved in scouting both in Washington and St. Albans as well as volunteering several years at Camp Holy Cross. He was a Ham Radio operator and assisted many individuals in times of distress.

Father Laplante was also a licensed private pilot, a member of the Experimental Aircraft Association and for 28 years served as a Captain and Chaplain for the Vermont Civil Air Patrol. He will be remembered as a very devout, kind and generous priest, who was always available to help anyone, with any need.

Father is survived by his brother, Ronald Laplante and his wife Mary Jane (Charland) of Davenport, Florida; a sister-in-law, Jeanne (Poirier) Laplante of Winooski as well as many nieces and nephews including a devoted niece, Linda Laplante of South Pasadena, Florida.

In addition to his parents, Father was predeceased by his sister, Rita and two brothers, Conrad and Fernand Laplante.

The Liturgy of Christian Burial will be celebrated Monday September 8, 2014, at 11 a.m. from Holy Angels Roman Catholic Church, 246 Lake St., St. Albans City. The Reverend Monsignor John J. McDermott, Apostolic Administrator for the Roman Catholic Diocese of Burlington will be the celebrant and The Reverend Monsignor Reid C. Mayo the homilist. The Rite of Committal and Interment will take place Monday at 3 p.m. in St. Francis Xavier Cemetery, Weaver St., Winooski.

Friends may call at The Kidder Memorial Home, 89 Grand Ave., Swanton on Sunday September 7, 2014, from 4 to 7 p.m. and Monday at Holy Angels Church from 10 a.m. until the hour of the funeral.