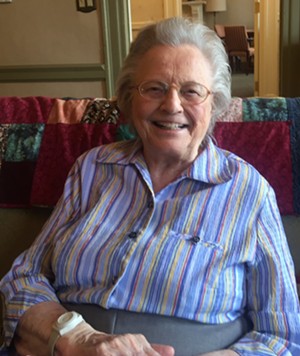 Jane Corliss LaRock died in her sleep January 5th, 2016. She was 92 years young. Jane was born in St. Albans, Vermont to Bruce and Allene Corliss, longtime residents of Vermont.

In her childhood, Jane lived in St. Albans and later Bennington. Jane was a graduate of Bellows Free academy, followed by merchandising school in New York City where she enjoyed her work for Abraham and Straus. In her adult years she married Ralph I. LaRock, her childhood sweetheart, a marriage that endured across 59 years. Ralph, a West Point graduate, pursued a military career, retiring as a Lt Colonel after 30 years. Life as a spouse to an Army officer took Jane to stations in Kansas, Texas, Virginia, and Japan. Her family life in Virginia was augmented by her role as a kindergarten teacher – a position she loved. The couple eventually retired to homes in South Carolina and her childhood home in St. Albans. Her final six years saw Jane in the marvelous care of Burlington’s Converse Home.

Jane was preceded in death by her husband, Ralph as well as her sons: Ralph Corliss LaRock and Steven Bruce LaRock, as well as her sister, Marmite Corliss Hayes and brother, Allen Bruce Corliss. She is survived by her loving daughter, Elizabeth LaRock Kantner and her four beautiful grandchildren: Alexandra LaRock, Danielle LaRock, Allison Kantner, and Evelyn Kantner.

Jane’s ever positive outlook on life will be missed by the many people who loved her and whose lives she graced. These include her supportive extended family who have been so very helpful to Jane throughout her life - especially in her later years. Jane was a long time member of St. Luke’s Episcopal Church.

A service will be held this summer at a date to be determined. Assisting the LaRock family is the Heald Funeral Home where messages of condolence are welcome at www.healdfuneralhome.com.