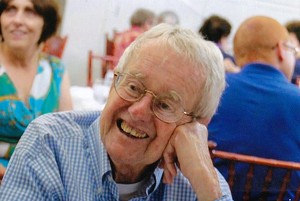 Jim was born in Colchester, Vt., on April 9, 1927, to Mary Magner and Joseph Augustine McNamara. He graduated from Cathedral High School (class of 1945), The College of the Holy Cross (class of 1950), and Cornell Law School (class of 1953). He enlisted in the U.S. Navy on his 18th birthday and served his country during the final months of WWII, until his discharge in 1946.

After graduation from law school, Jim returned to Burlington and began his law career as an assistant city attorney. He later entered private practice with his father, and later formed the firm of McNamara, Fitzpatrick and McCormick, where he practiced law until his retirement in 1992. Jim was a public-spirited Vermonter who held elected and appointed positions throughout his career and life. He served as a justice of the peace for over 30 years. After retiring from his law practice, he was appointed by former Governor Howard Dean to fill a vacant seat in the Vermont House of Representatives, representing Burlington’s North End. He was later elected to three full terms, during which he served on the Transportation Committee.

Following his time in the state legislature, Jim was appointed to multiple terms on the Vermont District 4 Environmental Commission. He cherished his work and colleagues on the Commission, so much so, that he served up until the time of his death. As a longtime member of the Burlington Country Club, Jim played golf with his regular foursome for decades. He skied at Stowe and met his future bride, Ellie Brown, there in 1958. He later shared his love of the sport with his children by teaching them to ski on Mount Mansfield, and he continued to ski well into his retirement years. Jim had a beautiful tenor singing voice and was active in singing groups most of his life, including the Holy Cross Glee Club, various barbershop groups, the South Burlington Community Chorus, and at Catholic mass.

A devout Catholic, Jim was guided by his faith. He was a member of the Cathedral of the Immaculate Conception and St. Mark parishes, where he volunteered as a lector and representative of the annual Bishop’s Appeal. He also served on the board of trustees of Trinity College.

Our fondest memories of Jim were those spent with the family on the patio of our Killarney Drive home, overlooking Lake Champlain and the Adirondacks. He could often be heard whistling or singing a favorite tune while walking in the yard or tending to his cherry tomatoes. He and Ellie enjoyed entertaining there or simply having a glass of wine at the end of a summer day. Jim lived a meaningful, yet understated, life. While he had many interests, he most enjoyed spending time with family and friends, listening to music and coming up with clever plays on words. He loved a good joke. Most of all, Jim will be remembered for his dry sense of humor, genuine interest in others and his unfailing kindness to friends and strangers alike.

Jim was a devoted and loving husband, father, and grandfather. He was married for 44 years to Ellie, who predeceased him in 2004. He was the father of four children: Christie, who predeceased him in 2005; Joe, of Williston; Maggie (Mike), of Marblehead, Mass.; and Jamey (Penni), of Falls Church, Va. Jim had ten grandchildren: Emilia and Jonah Sens; Caroline and Mary McNamara; Sean, Peter, Ben and Graham Jackson; and Claire and Rory McNamara. Jim did a remarkable job forging unique and joyful relationships with each of his grandchildren as the sole McNamara grandparent throughout the 18 years Ellie has been gone. We are so thankful for his enduring presence in their lives. Jim has one sister, Nancy Harris, of Needham, Mass., and was predeceased by his sisters Maureen McNamara and Martha Mahoney. He also leaves behind many nieces and nephews. A Mass of Christian Burial will be held on Saturday, December 17, at 10 a.m. at St. Mark Catholic Church, 1251 North Avenue, in Burlington. Services are in the care of Corbin and Palmer Funeral Home. Donations in Jim’s name can be made to Special Olympics Vermont, 16 Gregory Drive #2, South Burlington, VT, 05403 or at specialolympicsvermont.org.