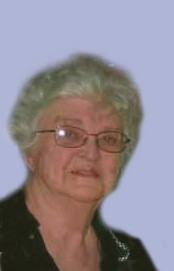 Born in Alburgh on, July 30, 1924, she was the daughter of the late Asa and Relia (Shedrick) Langlois and attended Alburgh schools, the Class of 1941. She moved to Willimantic, Ct at the age of 18 to work for Pratt and Whitney and met her first husband Richard Courtois. They married on, July 3, 1942, and together raised three children. Richard predeceased her on, February 23, 1958. Later on November 21, 1968, she married Richard’s best friend, Olson Bluto and together they raised a son. Olson predeceased her on, March 8, 1999. Hortense owned and operated a successful community care home in St Albans caring for six developmentally disabled people at a time, providing them with a stable home, treating them with dignity and respect and accepting them as members of her family. She and Olson took their girls to McDonalds every Friday night in their Suburban’s and Chevrolet Celebrities. She and Olson were also members of a camping club from the 1960’s through the 1980’s traveling all over New England in their Winnebago. They hosted multiple parties at their home in St Albans Bay that drew large crowds where fun was had by all. She enjoyed hosting holiday gatherings for her family for many years and established traditions that have been carried on for generations. She was also a CB operator with the handle “Hummingbird.”

In addition to her husbands, Hortense was predeceased by a sister, Leola Rooney; brother, Romeo Langlois and a niece, Jean Therrien.

The Liturgy of Christian Burial will be celebrated Monday, November 23, 2015, at 11 a.m. from Holy Angels Roman Catholic Church, 245 Lake St., St. Albans City. Father Maurice J. Roy will be the celebrant and homilist. The Rite of Committal and Interment will follow at the Courtois / Bluto family lot in Mount Calvary Cemetery.

Friends may call at The Kidder Memorial Home, 89 Grand Ave., Swanton on Sunday from 1 to 4 p.m.