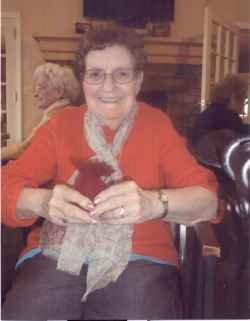 Harriet A. Jarvis-Elwood a longtime area resident passed away peacefully Wednesday, December 28th, 2016, at the Homestead at Pillsbury with her loving family at her side.

She was born at home in Fletcher on August 12th, 1933, the daughter of the late William and Hilda (Metevier) Pilbin. Harriet was 83 years old.

Harriet was a longtime associate with the William Doolin & Company retiring following 20+ years of service. She then worked at the Mom & Me Shop in St. Albans. She was a former member of the Franklin County Senior Center, the High Swans in Swanton and a longtime communicant of Holy Angels Parish. She enjoyed sewing and being with her family.

A Mass of Christian Burial will be celebrated on Tuesday, January 3rd, 2017, at 11:00 A.M. at Holy Angels Catholic Church, 245 Lake Street with the Reverend Maurice J. Roy as celebrant. Interment will be next spring in the family lot at Mount Calvary Cemetery.

As an alternative to flowers, memorials may be made in Harriett’s name to the Homestead at Pillsbury, Activity Fund, 3 Harbor View Drive, St. Albans, Vermont 05478.

Those wishing to send Harriet’s family a written expression of sympathy, please go to our on-line guest book at www.healdfuneralhome.com.