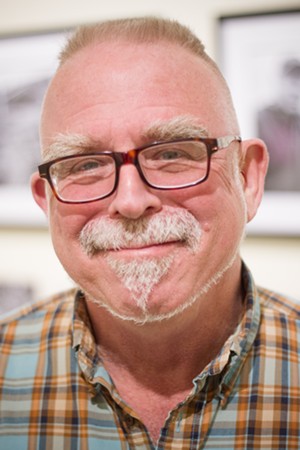 After a 12-month struggle with multiple myeloma, a form of bone marrow cancer, Gregory Lew Sharrow of Pittsford, Vt., passed away in the early morning of April 2, just after his 68th birthday. He is survived by his husband, Robert Hooker, and their close friend and caregiver Brian Moulton, both of Pittsford; daughters Madeline Sharrow of Northfield and Olivia Sharrow of Burlington; stepdaughters Elizabeth Henry-Hooker and Siobhan Henry-Hooker (m. Dave Tomlinson), granddaughter Slade Tomlinson and step-grandsons Jack and Taige Tomlinson, all of Burlington; his former wife, Jessica Wright, of Braintree; brother-in-law George Hooker (m. Cheryl) of Rutland; and several nieces and nephews. He was predeceased by his parents of Indiana and Rutland and his brother Douglas of Michigan.

The last 12 months of Greg’s life were increasingly challenging as he struggled with the cancer, but no one could have asked for a better care team than Bob and Brian. Greg was never alone and was lovingly doted upon throughout it all. As he neared the end, the wonderful assistance of the staff of VNA & Hospice of the Southwest Region was professionally and tenderly provided to Greg and his family.

Gregory was born in Angola, Ind., on March 26, 1950, to parents Marjory and Earl Sharrow. He liked to describe his childhood environment as growing up in a garden. His mother was an avid gardener, a painter, and a collector of interesting and unusual objects. The interior and exterior of the houses in which they lived were always filled with bright colors, beautiful flowers and an array of unusual furniture, much of it repurposed, repainted and, in some cases, even reconstructed by Marjory.

His family also had a cottage on Crooked Lake in Angola, which was the historic site of his great-grandparent’s farm called Kidney Landing. His childhood summers centered on the lake, and his love of being on and in the water persisted throughout his whole life. Greg always had a passion for history, family stories and old things. At the age of 8, Greg opened “The Little Museum” in the basement of his parents' house, and he and his mother, with whom he shared this passion, would go collecting for it. There are to this day a few small items still labeled “The Little Museum” at Greg and Bob’s home in Pittsford.

After graduation from Angola High School in 1968, Greg attended Oberlin College in Ohio, where he majored in East Asian studies, spending his junior year living abroad in Taiwan and Japan. His interest in Japanese culture persisted, and he was able to speak some Japanese until the end of his life.

After finishing college, Greg came to Vermont to visit his close college friends Jim and Dianne Sardonis in Randolph in 1974. He was so charmed by the landscape and the people that he stayed, making his home in Braintree. He married Jessica Wright in 1979 in Snowsville, a village within the town of Braintree, arriving at the small church in a horse-drawn carriage. They were married for 19 years and had two daughters, Madeline and Olivia.

Earning a master’s degree in education from the University of Vermont in 1979, he taught at the Braintree Elementary school for a number of years, receiving the Outstanding Teacher of the Year Award in 1983. While living in Braintree, he also served as chair of the Braintree School Board and as a longtime trustee of the Braintree Historical Society.

In the early 1980s, Greg connected with the newly founded Vermont Folklife Center in Middlebury. With encouragement from the founding director, Dr. Jane Beck, Greg went on to receive a PhD in folklore and folklife from the University of Pennsylvania, during which time his older daughter, Madeline, was born (1984). Upon completion of his course work in 1987, he was appointed a Mellon Graduate Fellowship for the academic year 1987-88 while he returned to Vermont and completed the fieldwork for his thesis.

In 1988, the same year his second daughter, Olivia, was born, Greg joined the full-time staff at the Folklife Center as director of education and fieldwork, where he set out on a 30-year adventure exploring the small towns and back roads as well as the bigger cities and numerous schools of Vermont, talking to and listening to literally thousands of Vermonters along the way. His vast collection of recorded interviews lives on in the Folklife Center archive.

In 1991, Greg helped establish the Vermont Traditional Arts Apprenticeship Program at the Folklife Center, which facilitates the passing on of the arts and crafts traditions of the many cultures in Vermont. This program flourished under his supervision and still thrives today.

Greg has described his experience of growing up in rural Indiana in the ’50s and ’60s as one in which “being gay simply wasn’t an option.” He lived the first half of his life as a heterosexual man, marrying a woman for whom he professed love and the utmost respect for until he died and with whom he had two children. However, over time Greg continued to wrestle with his sexuality.

In the summer of 1996, Greg met Bob, who was also going through the process of coming out of the closet and redefining his family life. In addition to being gay, they both admitted that they had never met anyone quite like each other. They have been practically inseparable for the past 22 years. They eventually purchased Bob’s grandparents' house in Pittsford, where they have made a home for themselves and their collective four daughters. As they settled into the Pittsford neighborhood, Greg began creating another version of the gardens of his childhood, turning the small front yard into a teeming jungle of phlox, iris, yucca, flowering vines, grape vines, and daylilies.

Bob and Greg celebrated their civil union in 2001, following the passage of the Vermont Civil Union Law. They were married officially in 2010 at the Pittsford Congregational Church in the presence of their children, mothers, and many friends and family.

From 2000 to 2002, Greg partnered with a videographer to create a documentary focusing on the present-day Abenaki culture in Vermont. This period marked a transition for him in his work, shifting from a historical perspective focused on oral history to seeing his work as a powerful tool for understanding the present. His evolving belief was that each individual is the expert in their own experience and that, from that point of view, we can deepen our understanding of collective histories and communities. Greg described this approach to oral history as listening to “a chorus in which some voices speak in unison, others in harmony and still others in dissonance. The truth lies less in any individual voice than in this complex intermingling of these many voices simultaneously speaking together.”

This new way of thinking also came into play with his work with the many New American communities around the state that welcomed him into their lives to help tell their stories.

Later in his career, he began exploring themes related to memory and experience as his mother, whom he had brought to Vermont in 2002 at the age of 84, experienced progressive dementia.

Greg’s passion for unusual everyday objects and history found a match in Bob, and together they turned their home into a living museum. Greg explaining the philosophy behind their kitchen: “You have one vintage toaster; it’s just a toaster. You have seven vintage toasters, and all of a sudden you have the history of industrial design”

Although not actively religious, Greg was always fascinated with religious traditions and paraphernalia and for each holiday had foods and decorations: For Christmas, he filled the house with Nativity scenes of all sizes and ages (57 at last count) and made an Advent wreath with pink and purple candles and a plum pudding with a coin baked in. For Easter, he made a lamb-shaped cake with white frosting and coconut flakes for wool and Ukrainian egg-decorating kits.

Greg’s life was punctuated with geraniums, Siamese cats, brook walks and going tubing with his children, baking breads and pies, making jam, and near-obsessive genealogy research. Greg had a great love for his old rowboat which he used to hunt turtles (not to kill them but to observe their antics) on Crooked Lake where he grew up and later on small lakes around Rutland and Addison counties with his children and husband. He also had a lifelong battle with anxiety and would furiously glue broken furniture on the eve of holiday meals and other stressful occasions. He was very fortunate to be able to get most of his anxiety under control in the last few years with carefully prescribed medication.

Greg felt things deeply and intensely. He was a charismatic, life-affirming person who brought tremendous passion to whatever he was doing and fostered deep connections between people. This legacy lives on in his family members and in the countless friendships that he cultivated and cherished over the years.

Gregory affected many lives deeply and will be dearly missed by the many who loved him. A memorial service is planned for July 28 at 3 p.m. at the Congregational Church in Pittsford. It will include music, a potluck meal, and a chance to share Greg stories with friends and family.

In lieu of flowers, memorial donations may be made to the Greg Sharrow Fund at the Vermont Folklife Center, 88 Main St., Middlebury, VT 05753 and at vermontfolklifecenter.org.