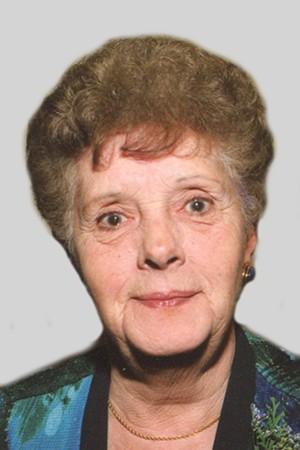 Gloria Mary Churchill, age 82 years, a lifelong resident of the Swanton community left to join her husband Junior, Monday evening, September 19, 2016, in the St. Albans Healthcare and Rehabilitation Center with loving family at her side.

Born in Swanton on November 1, 1933, she was the daughter of the late Lucius and Louise (Hakey) Richard. She attended Swanton schools and on July 23, 1948, was married to Wellington “Jr” Churchill who predeceased her on April 8, 2000.

Gloria was a very kind and generous person helping many people throughout the Swanton community by giving rides to various appointments and voting. She also assisted in putting together food baskets for the less fortunate at Thanksgiving time. She was a devoted wife, mother, grandmother and great grandmother. Prior to her retirement Gloria worked several years for the former Swanton Foundry. In her later years she enjoyed daily trips to the Swanton McDonalds to visit and have coffee with her friends.

Gloria leaves her daughter, Cindy Churchill and husband Andy Pearce of Swanton; a son, John Churchill and his wife Mary of Alburgh; a brother, Donald Richard and wife Shirley of St. Albans; two sisters-in-law, Agnes Churchill of St. Albans and Mabel Richard of Camden, NJ as well as several grand and great grandchildren and nieces and nephews. Gloria also leaves many dear friends who often came to visit her on her New Street front porch.

In addition to her parents and husband Junior, Gloria was predeceased by a son, Jim Churchill in 2012 and her siblings, Betty Thompson, Arnold Richard, Delwin and Shirley Richard, Ardelle and Chuck Corriea, and Timmer and Barbara Richard.

Gloria’s family extends their sincerest appreciation and thanks to the staff and caregivers of Our Lady of the Meadows in Richford, especially Linda Zenisky (Mary); the fabulous staff of the St. Albans Healthcare and Rehabilitation Center, especially Patty Deroches; Gloria’s best friend April Metz-Daskalides; amazing and gifted friend Brent Garrow and close friends Kathy, Eugene, Ross and Ryan Lavoie.

A Funeral service will be held Sunday, September 25, 2016 at 2 p.m. from The Kidder Memorial Home, 89 Grand Ave., Swanton. Father Luke P. Austin will officiate. The Rite of Committal and Interment will be private and at the convenience of the family.

Gifts in Gloria’s memory may be made to the Alzheimer’s Association of Vermont, 300 Cornerstone Dr., Williston 05495 or to the Franklin County Animal Rescue, 30 Sunset Meadows, St. Albans, 05478.