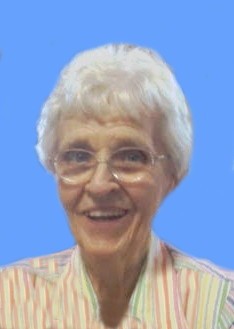 Georgette H. Rainville, age 92 years, a lifelong area resident and more recently of the Homestead at Pillsbury St. Albans, died Sunday, October 4, 2015 with loving family at her side.

Born in Sheldon on, December 18, 1922, she was the daughter of the late Samuel and Arzelia (Brodeur) Parent. She attended Sheldon schools and on June 15, 1949, was married to Jean-Louis Rainville who predeceased her on December 31, 2002.

Mrs. Rainville will be remembered for her deep and abiding faith. A devoted parishioner of Nativity-St. Louis Parish, she was also a longtime member of the St. Louis Ladies of St. Anne.

In addition to her parents and husband Jean-Louis, Mrs. Rainville was predeceased by two brothers and their wives, Leo and Biola Parent and Ulys and Helen Parent; four sisters and three brothers-in-law, Simone and Come Lussier, Rose and Theobold Charron, Sr. St. Maxime, SSM, and Jeanne and Lucien Demers. She was also predeceased by brothers-in-law and sisters-in-law, Wilfred and Alsyma Rainville, Henri and Mae Rainville, Emil and Therese Rainville, Yvonne and Clarence Real, Mary Anne and Joseph Desany, Rene and Jeanne d’Arc Rainville, Marguerite and Hyacinth Beaulieu, Raymond and Emilienne Rainville and Rita Parent.

At Mrs. Rainville’s request there will be no public calling hours. In lieu of calling hours, those who wish to extend their condolences to the family are invited to attend a gathering of the family following the funeral services at the St. Louis Parish Hall.

The Liturgy of Christian Burial will be celebrated Saturday, October 10, 2015, at 11 a.m. from St Louis Roman Catholic Church, 186 Lamkin St., Highgate Center. Mrs. Rainville’s nephew, Fr. Marcel R. Rainville, SSE will be the principle celebrant and Fr. Roger L. Charbonneau the homilist. The Rite of Committal and Interment will follow at the Rainville family lot in St. Louis Cemetery.