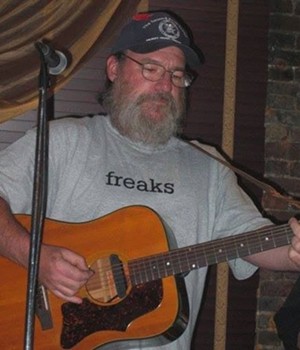 Gary Sisco (June 27, 1954-September 17, 2020) was a dedicated partner of 27 years to Bronwyn. "Crispo," as he was known to friends, was a lifelong lover of music, horses, and the struggle to improve the human condition against the unrelenting oppressive forces of capitalism, totalitarianism and authoritarianism.

Gary served in the Coast Guard in the 1970s, as a Loran tech on the isolated volcanic cratered hellscape of Iwo Jima. In the 1980s, he worked tirelessly as an activist, risking his life in Nicaragua to support the revolution and, upon his return, cofounding MACV (Material Aid Committee Vermont), sending material aid to the Nicaraguan military and the guerillas of El Salvador, fighting U.S.-backed terrorists. Crispo’s everyday commitment to the struggle for human dignity was wide-ranging and notable. He managed a homeless shelter and fought for public access to waterways and affordable housing. More recently, he was an outspoken supporter of democratic confederalism as practiced by the Kurdish YPG/YPJ. Gary was an Anarchist and longtime friend and confidant of Murray Bookchin, as well as a voracious reader of scholarly genres including political theory, history, the cosmos, religious writings and the natural world.

In the '70s and '80s, he toured nationally as a musician with a number of two-fisted bar bands, including the Sensitivos, the Clamtones and 100 Proof. Sisco loved regaling all and sundry with tales of drunken excess and gunplay while on tour. He maintained a lifelong connection with and love of jazz, hosting a long-running radio program about the same, and even became ensconced in the Lexington death metal scene.

All who knew Gary Sisco, a one-of-a-kind human being, will forever think of him most for having, without fail, the courage of his convictions and for his love of Brownyn. He will be missed by family, friends and a wide array of fellow travelers.

Services are being held in people’s hearts worldwide. Support for Brownyn can be made through GoFundMe "Remember Gary Support Bronwyn Sisco."