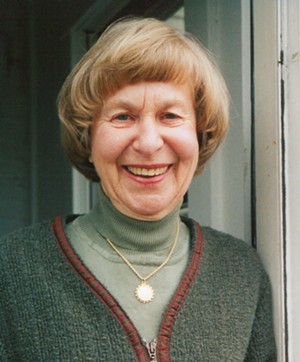 Estelle Deane died May 14, 2020, on a beautiful Vermont spring afternoon at Wake Robin in Shelburne, Vt. Estelle, who had just celebrated her 90th birthday, was born on May 12, 1930, in Pretoria, South Africa, the fourth of five children and the youngest daughter of the late Hendrik and Doreen Alberts.

She was educated in public schools and graduated as an accomplished student from the University of the Witwatersrand, Johannesburg, with a BS in physical therapy. She became a member of the staff of the Johannesburg General Hospital and the Baragwanath Hospital before spending two years working in England. She then returned to the University of the Witwatersrand, where she served as a member of the teaching faculty for two years.

Estelle married her husband, Dr. Robert (Bob) Deane, in 1955 and, in 1962, leaving their families and the world they knew behind, they journeyed together with their two small children across the Atlantic from Cape Town, South Africa to begin a new life in Burlington, Vt. Bob completed his residency in anesthesia at the University of Vermont Medical Center (then the Mary Fletcher Hospital) and then continued his career as an attending physician at the hospital. Estelle joined the physical therapy staff of the rehabilitation unit of the Bishop DeGoesbriand Hospital and subsequently continued as a dedicated member of the Visiting Nurse Association of Chittenden and Grand Isle County, traveling many miles and bringing clear direction and healing to her clients through many Vermont seasons.

Estelle participated enthusiastically in both professional and community organizations. She was a member of the American Association of University Women, serving as president of the Burlington branch and state vice president. She brought her perspective and experience to her subsequent work as a member of the boards of HomeShare Vermont, the Converse Home, the American Lung Association of Vermont and the Vermont Symphony Orchestra Regional Board.

In partnership with Joan Madison, and in recognition of the shared vision of Dr. Bob Deane and Dr. Jim Madison (who died only months apart from pancreatic cancer in 1997), Estelle founded the Madison-Deane Initiative, a sustained effort to highlight the critical need for expanded education and resources to physicians and caregivers providing care and comfort to those facing the challenges at the end-of-life. Through 20 years, MDI supported annual presentations by recognized thought-leaders in palliative and end-of-life care and sponsored critical learning opportunities for students at UVM’s Larner College of Medicine.

A woman of resolute faith, Estelle was a stalwart member of the congregation of the Cathedral Church of St. Paul, serving in many roles in her ministry: as a verger, as a multiterm member of the vestry, as a lay Eucharistic minister, and on the Flower and Altar Guild. The flowers on Easter Sunday and the beautiful Christmas wreaths that graced many church members' holiday doors were a true expression of Estelle’s joy in life: making beautiful things and sharing that joy with others.

Estelle was an avid sportswoman. A South African learning to ski with all of her children on Mount Mansfield’s trails, she continued on after her children were grown to enjoy annual ski trips to renowned ski destinations in Switzerland and France. She was also a tennis player who loved a good competitive game of doubles with her friends, as well as a cross-country skier and a runner until her hip and knees would not go further. She sewed beautifully and reveled in working in her garden.

Estelle took great joy in life and in things properly and purposefully accomplished. Although fiercely independent and self-reliant, she was also generous with her smile and her good humor, always glad for the opportunity to enjoy a glass of wine with friends and family. She was thankful to be part of the caring Wake Robin community, where she found lasting friendships and opportunities for meaningful engagement. Most important to Estelle was her enduring love for her husband, Bob, whom she lost far too soon, and although she missed his companionship after his death in 1997, she continued to build a rich life filled with friendship and service to her community.

Estelle is survived by her daughter, Jayne C. Deane-White, and Jayne’s children Jennifer Philipchik (Drew), Adrienne and Alisa White, and her great-grandchild Leah Philipchik; her son Richard S. Deane and his wife, Ina Mende-Deane, and their children, Aidan and Colin; and her son Andrew J. Deane, MD and his wife, Lori Balardini-Deane, and their children Max and Sarah. In South Africa, she leaves her sister Doreen, her brother Hendrik, and many nieces and nephews.

A memorial service will be held at St. Paul’s Cathedral, 2 Cherry St., Burlington, VT when the circumstances of the current health crisis allow.