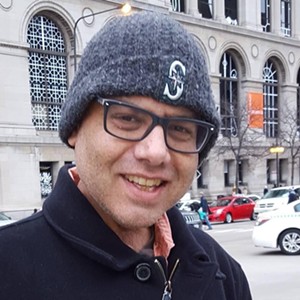 Eric Scott Slesar — beloved father, husband, son, brother and friend — passed away at his home in Seattle, Wash., on March 18, 2021. Born in Poughkeepsie, N.Y., he lived in various places before settling in Seattle, where he lived with his family.

At the time of his passing, he was a programmer and writer for Amazon, although his working life took many paths. His true passion was working with children of all ages.

His life was rich with his many passions, including composing and playing music, volunteering to teach chess to children and singing with preschoolers, eating delicious foods, laughing at standup comedy, playing strategy games, doing anything mathematical, enjoying top-shelf tequila, and debating (and usually winning) anyone about pretty much anything. Eric loved intellectual challenges of all kinds and was always up for a game. Indeed, many of us considered ourselves blessed to have lost to him in a game of chess. All the children in his life knew that Eric was a person they could count on; an ear for their worries who could deliver a bedtime song, a good game and some solid advice; and just someone to laugh with. Eric was a talented musician who played many instruments. He will be remembered for blowing his blues harp with passion and singing his beautiful, meaningful songs.

If you knew him, you loved him — dearly. It’s that simple. His essence was gravitational, and he pulled you instantly into his orbit with a kind word and his amazing smile. There are so many of us he held in love. He was the glue that held together a universe of people that he cherished and who cherished him in return.

Eric is survived by his wife, Wendy Simmons; his children Lydia Simmons, Eli Simmons and Sharmaine Brown; his mother, Carol Slesar; his sister Suzanne Slesar and her husband, John, and their son Jayce Slesar; his sister Lara Slesar and her husband, Shawn Doyle, and their children, Harris, Hazel and Gibson Slesar; and his maternal aunt and uncle, Gail and Richard Buckle, and their son David White; in addition to his many friends who might as well be family. There are just too many to name, and they feel the hole his loss has made in their lives just the same.

In honor of Eric, please share your vulnerability, spirit and gifts with others and truly appreciate those you love.