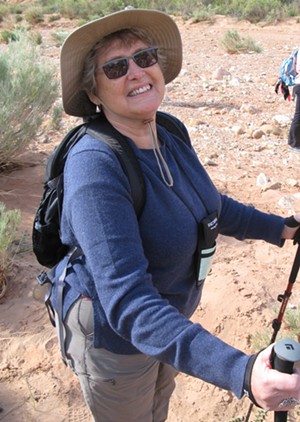 She was born Sept. 25, 1945, in St. Johnsbury, the daughter of Russell and Patricia Wilson, and spent her early years in Lyndonville. She married Thomas K. Slayton on Dec. 24, 1964, and they have one son, Ethan. Liz attended the University of Vermont and graduated from Castleton State College (now University) in 1967, with a teaching degree.

She taught elementary school in Mount Holly for a year, and then moved with her husband to Montpelier, where she became active in Democratic Party politics. She worked on campaigns for Secretary of State James Guest and U.S. Sen. Patrick J. Leahy, joining Sen. Leahy’s Vermont staff in 1980. For 20 years, Liz was Sen. Leahy’s human services representative in Vermont, retiring from that position in 2000. Later, she worked for Central Vermont Home Share.

Liz devoted her working life to helping people. In her years with the Leahy staff, she worked with social service agencies across the entire state, learning about their work and problems, and helping them obtain financial and other support to which they were entitled. She also informed the Senator and his Washington staff of the needs of Vermont individuals and human service organizations, and was instrumental in helping Senator Leahy fund Community Health Centers all over Vermont.

Liz had a deep affection for the underdog, and consistently advocated for the poor, for children, the elderly, and those who needed a hand up. She was warm, friendly, articulate, and sincere in her desire to help. As a result, she became known, trusted, and liked by virtually everyone she came in contact with, both in her two decades with Sen. Leahy and later with Home Share.

She was fun to be around, and had a gift for putting people at ease. She once said that even in the humblest of homes, she could always find something to exclaim over and compliment.

“She lit up a room, coming into it,” one acquaintance said.

Her innate personal dignity was leavened with a vibrant sense of humor, and co-workers remembered fondly her joyous, infectious laugh.

Liz was devoted to her family, and worked to make their home and flower gardens places of comfort and delight. She had a lifelong love of music and a beautiful voice. As a young woman, she considered a career as a concert soprano, but set that goal aside to marry and have a family. Nevertheless, she and her husband enjoyed many different forms of music throughout their life together. She especially loved the music of J.S. Bach and W.A. Mozart. She was an active member of Christ Episcopal Church in Montpelier, where she served on the Vestry Committee and the Altar Guild.

Besides her husband, she leaves behind her son, Ethan A. Slayton and his wife, Shawna, of Portland Oregon, and several cousins, and nieces.

A memorial service is planned for a later date at Christ Episcopal Church. An announcement of the date and time of that service will be made when they are established.

In lieu of flowers, please make contributions in her memory to Central Vermont Home Health and Hospice or to the McClure-Miller Respite House in Colchester.

Those wishing to express online condolences may do so at www.guareandsons.com.