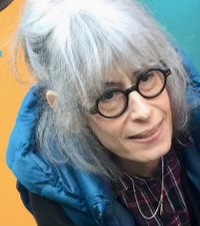 Elaine Segal, blazing force of nature and night owl to the end, escaped this mortal coil and a body racked by Crohn’s disease shortly before midnight on Saturday December 4, 2021, accompanied by Glenn Gould playing Bach.

Elaine was born in Minneapolis, on Groundhog Day, in 1951. Following a brief stint at the University of Wisconsin-Madison, she fled the midwest for Vermont, where she began her new life by making harpsichords and tending goats before going on to provide sex education classes at the Vermont State Hospital, to work in the Writers in the Schools program, to teach at Goddard College and UVM, and to organize otherworldly exhibits for the Fleming Museum — all while becoming an artist like no other artist on Earth. Elaine was fiercely intelligent, incredibly funny and endlessly inventive. In addition to her work as a performance artist (the Real Donald Duck, the Big Little History of Art, Fun With Dick and Jane, Every Poor Girl’s Dream), as an NPR commentator ("November," "the Prophet," "Remember That Babysitter," "She Loves You"), as a creator of picture books (“novels poured into thimbles”) for adults (Waiting for the Mikado, Mein Honeymoon, Can You Forgive Her, She Loves You), Elaine filled the walls with astonishing works of art at North Union Street in Burlington, a household that was a true beehive of artistic activity that she shared with her loving husband and artistic partner, Lance Richbourg, and her beloved dogs Kaspar and Sparkle (who predeceased her).

Elaine gave it her all, according to Daniel Pinkwater, a fellow NPR commentator. Elaine didn’t leave anything unused. Elaine used to say, wryly, that she was NPR’s least-loved commentator — another way of saying that what she was doing wasn’t meant to be heartwarming. There was never a shred of sentimentality about anything Elaine created; her art was always spectacularly gorgeous to look at, hilarious, brilliant and heartbreaking.

As those of us lucky enough to have been counted among her friends know, Elaine was a rare and irreplaceable being; in addition to her husband, Lance, and her dog Kaspar, she is survived by her sisters Myra Friedman and Susie Bernstein, her daughter-in-law Gaelle, and her three adored grandchildren, Paul, Anna and Cosmo.

A memorial is planned for the spring.