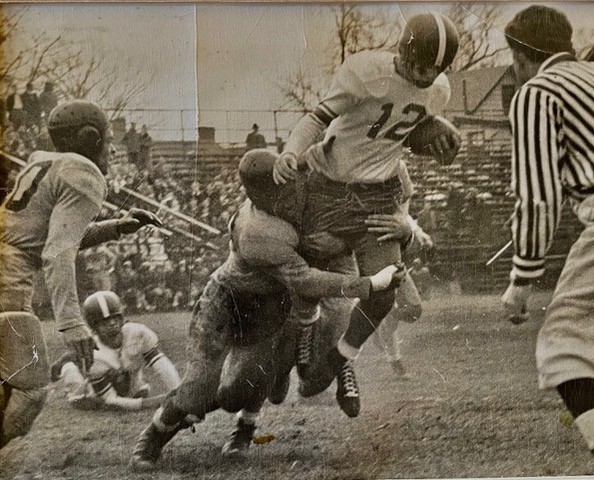 Edward “Ed” Clifford Haggerty died peacefully amid loved ones on October 26, 2020, in Bridgeport, Conn. He was 87 years old and predeceased by his wife of 56 years, Margaret “Marti” Kerr Haggerty. An international public relations specialist and advertising executive, Ed worked on five continents during a 45-year career.

Ed was born in Newark, N.J., in 1933 to Anna and Earl C. Haggerty. He attended Seton Hall Preparatory School in South Orange, N.J., and in 2010 was inducted into the Seton Hall Prep Hall of Fame as part of its illustrious football team of 1949. Ed went on to attend the University of Virginia’s Woodrow Wilson School of Foreign Affairs and was a member of the Delta Upsilon fraternity. He later did graduate work at New York University.

In 1955, Ed married the love of his life, Marti Kerr. He served in Korea as a company commander in the U.S. Army's 51st Signal Battalion. Upon returning to civilian life, Ed embarked on his public relations career, spending 18 years with W.R. Grace & Co. in New York City and Baltimore as a director of advertising and PR. After Grace, Ed was head of PR and spokesperson for St. Vincent’s Hospital in Greenwich Village and later became head of U.S. operations for the Swiss-based communications firm Sydney Morrell & Co., where his clients included the Australian State of Victoria.

Ed resided in Summit and Sea Girt, N.J., for 33 years, during which time Marti and he raised a family of five. He was active in the Summit community as press director for several mayoral and city council elections. He served as a board member for the Visual Arts Center of New Jersey, Family Services, Inc. and the Summit Minibus Development Committee. In his lifetime, Ed was also president of the Chemical Industry Association of New York, a member of various corporate advisory boards, and belonged to the Beacon Hill Club in Summit and Farmington Country Club in Charlottesville, Va.

Upon retirement, Ed and Marti built a house in Weybridge, Vt., before moving to a cottage at the Lodge (now the Residence) at Otter Creek in Middlebury.

In addition to his wife, Marti, Ed was predeceased by his sister, Marie Haggerty Johnston, and his son-in-law, William W. Keshishian. He leaves behind a loving family, whom Ed has imbued with his warm spirit and gracious heart, including his children, Richard K. Haggerty of Winooski, Vt.; Gwenne (James) Dawson of Richmond, Va.; Elizabeth (Gregg) Beldock of Charlotte, Vt.; Carol (James) Reardon of Orr's Island, Maine; and Moira (Billy) Keshishian of Bozeman, Mont.; and Ed’s grandchildren, Kate, Meg, Sarah, Geordie, Amory, Sydney, Liam and Sam.

A service of remembrance will be scheduled for a future date yet to be determined.