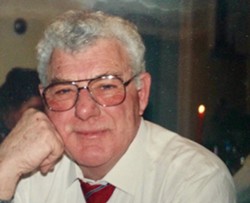 Earl graduated from Burlington High School in 1943, during his last two years of school he worked as First Mate on The Steamboat Ticonderoga. After graduation he joined the US Navy and served in the Pacific on the USS Hunt as a Gunner during WWII. He was honored for his service in the summer of 2014 by a trip with the Leatherstocking Honor Flight to Washington, DC.

He was employed as an agent for Metropolitan Life Insurance Company for 25 years. In retirement he enjoyed boating on Lake Champlain and the St. Lawrence River into Canada and traveling by motor coach throughout the United States with his wife and dogs for twenty years.

Earl was an avid sportsman and hunter. He founded the Addison Goose Club and presided as President for ten years. A lover of dogs, he was a member of the Lake Champlain Retriever Club. He raised and trained several of his Labradors to Master Level Hunters. His greatest joy in life was goose hunting with his friends on his property in Addison.

He is survived by his wife of 69 years, Carolyn (Grasso) Bessette of Addison; sons Chris Bessette and wife, Linda Little of Addison, Cory Bessette and wife, Mary of Portland, Oregon; daughters, Shelley Faris and husband, Les of Benson, Jacqueline McLean of Addison and Dale Spring and husband, David of Middletown Springs; twelve grandchildren and seven great grandchildren; sisters Geraldine of Varricchione of Winooski, Beulah Delibac of Burlington and Janet Hale and husband Robert of Sebastian, FL.

Visiting Hours will be at Boucher and Pritchard Funeral Home Wednesday, February 22, 2017, 4-7 p.m.

The service will be on Thursday, February 23, 2017 at 10 a.m. at Boucher and Pritchard Funeral Home. Following the service internment will be at Lakeview Cemetery where Earl will be accorded full Military Honors.

A Memorial Mass will be celebrated on Tuesday, March 7, 2017 at 9 a.m. in the Chapel of St. Peter's Church, Vergennes with Father Yvon J. Royer.