Lifelong New Paltz, N.Y., resident was a renowned storyteller who treated everyone with kindness and respect 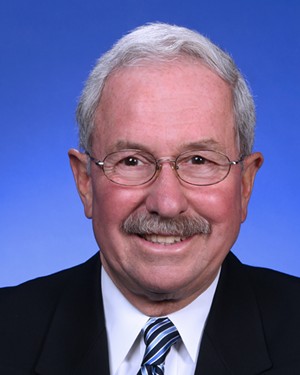 Dr. Vanderlyn R. Pine, 83, a lifelong resident of New Paltz, N.Y., died peacefully at his home on Tuesday, November 9, 2021. We fondly recall Van as a friend to many and a stranger to none.

Born in Kingston, N.Y., Van was one of two sons of the late Gordon and Marion Russell Pine. The Pine family established their roots in New Paltz early in the 19th century, and eight generations have called it home. Van viewed his ancestral connection to New Paltz through the eyes of a historian and historic preservationist. He could recount most of the names of the French Huguenots who settled in New Paltz, the houses they built and their particular trade or profession.

Van was a warm and demonstrably loving husband, father, grandfather, great-grandfather and friend. He treated everyone with kindness and respect, no matter their station in life. His kids recall how he greeted toll-booth operators as if they were old friends. He was a devoted husband for 30 years to his late wife, Pat. Until her death in 2004, they traveled extensively together throughout the United States, Europe and the Caribbean. He loved a good party and often opened their home to friends, family, and SUNY students and faculty for large and boisterous get-togethers for holidays, family celebrations and impromptu gatherings for any reason whatsoever. As a renowned storyteller, he would describe the sometimes humorous and always engrossing vivid details of events and situations that he, his family, circle of friends, neighbors and colleagues shared together.

When his father died suddenly in 1957, Van left Dartmouth College to help operate the Pine Funeral Home. His true calling was teaching, and he earned his doctorate while operating the business and raising three young boys. He served in the sociology department at SUNY New Paltz from 1970 to 1998. His contributions to the field of death education (thanatology) and the funeral industry are nationally renowned. He served on dozens of boards and commissions, as an expert witness before the Federal Trade Commission, and as an expert in the sociological aspects of disaster response. His innovative methodology of appraising the value of a funeral business was the gold standard in the industry.

As a self-taught carpenter, Van practiced and mentored his children in the art of historic preservation, home repairs, painting and property maintenance, often as a way to share their lives together. Once in a while, when they were adolescents, Van would assign his children a house project as the toll for capers so they could pay off their debts. He cherished how homes can help tell the stories of our history and took satisfaction in bringing back older structures that had seen better days. When his children acquired their own homes, Van would frequently visit them with a plan to build, repair or repaint something he’d noticed needed improvement. His imprint on their homes was a unique perfectionism that they all internalized when tending to what they love.

Van found great personal satisfaction in mentoring others through sports and education. He was an assistant football coach at New Paltz High School before his sons were born and stayed active as a high school football referee for years. As a college professor, he served as counselor and friend to hundreds of students who sought his guidance. An inveterate skier, Van founded and taught in the Minnewaska Ski School. He played in the New Paltz men’s softball league well beyond his peers, with his last season in his early fifties. As a loyal alumni of Northwood School, Van served as a trustee for more than 30 years. He relished the chance to sit in his favorite chair watching college football games with whomever would join him in the den, and as his children and their kids grew, he frequently traveled to watch all of them play sports — and may have embellished their exceptional abilities. He expressed his deep love for his family by showing up for many occasions and celebrations.

Van is survived by three sons, Gordon K. Pine of New Paltz; Brian Pine and his wife, Liz, of Burlington, Vt.; and Danny Pine and his wife, Chiho, of New Paltz; as well as by two stepdaughters, Paula Agor and her husband, Brian, of Surry, Va. and Brenda Bryan and her husband, Dave, of Andover, Mass; a brother, Tom Pine of New Paltz; 12 grandchildren, Brittany, Gordie, Melissa, Austin, Eli, Mina, Maki, Gates, Flynn, Kai, Bae and Quill; and two great-grandchildren, Jaxson and Bennett. In addition, Van’s first wife and mother of his sons, Peggy Pine of New Paltz, survives, as does his recent companion, Lorry Hetzer of Poughkeepsie, N.Y.

The family will receive friends at the Copeland-Hammerl Funeral Home, 162 S. Putt Corners Rd., New Paltz, N.Y., on Sunday, November 14, 2021, from 2 to 6 p.m. Funeral service and interment will be privately held.