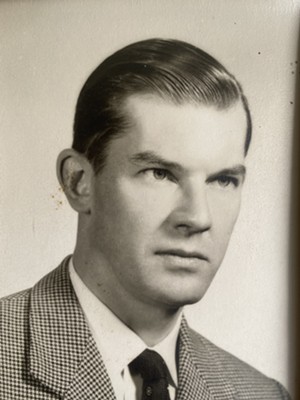 Thomas Chometon Gibson died on Saturday, May 2, at age 99. He was born in Burnley, England, on April 30, 1921, to John and Christiane Gibson; he was the outcome of a Franco-Scottish alliance. His father met his mother in France when he was serving as a medical officer during the first World War.

Tom was educated at Repton School, Clare College, Cambridge and London Hospital. He obtained a BA and MA and, in 1946, the medical degree of MBCHB. Whilst he was a medical student, he survived multiple air raids, served in the home guard and had the unforgettable experience of participating in the liberation of Bergen-Belsen. This led to a profound effect on his attitude to the human state.

After internships at the London Hospital, he was drafted into the Royal Air Force, serving in the UK and Singapore as a medical specialist. Returning to the London Hospital, he did residencies in internal medicine and cardiology, later going into private practice in London. In 1957, he was offered a fellowship in cardiology at the North Carolina Memorial Hospital. He had always felt drawn to the specialty, attributing this to his birth in the house of Sir James Mackenzie, the doyen of British cardiology.

Here he met his future wife, Barbara Wilmer, who was a pediatric resident at the hospital. In 1962, he moved to the University of Vermont, initially in the Department of Epidemiology and Community Medicine and later in the Department of Medicine. Here he exemplified the role of an academic cardiologist, known for his teaching ability, patient care and research, and publishing many papers. He was notably interested in the prevention of coronary artery disease and lectured extensively in the Vermont community and elsewhere on the risk factors associated with the disorder. He was also attracted to and developed a cardiac non-invasive laboratory and spent sabbatical years at the echocardiographic laboratories of the North Carolina Memorial Hospital and the Massachusetts General Hospital.

He was a past president of the Vermont Heart Association and served on numerous committees both regionally and nationally, including the editorial board of several cardiology journals. He was a fellow of the American College of Physicians, American College of Cardiology and the Royal College of Physicians, the latter an honour rarely given to expatriates. Retiring in 1986, he was awarded the title of emeritus professor by the University of Vermont.

Professor Gibson was, above all, a man of principle, a caring physician, and a good friend and trusted adviser to many. His interests were eclectic, including travel, reading, art, music, cryptic crosswords, sailing, golf and the correct use of the English language, the latter a rather futile pursuit.

He was predeceased by his wife, Barbara, who was his dearly beloved partner in life for 51 years and the mother of his five children: Andrew and wife Sarah, Paul and wife Allison, Clare and husband Bradley, and twin daughters Caroline and Penelope. His only sister, Anna, is deceased. Relatives survive in Canada, France and the United Kingdom. Last but not least, he and his wife had six grandchildren, who were an important part of their later life.

His interment will take place in Shelburne at the convenience of the family. Arrangements are in the care of Stephen C. Gregory and Son of Shelburne.

In conclusion, Tom would like to thank those people both medical and nonmedical who helped him to survive the vicissitudes of old age. Like his wife, he was concerned for those who had difficulty in affording health care and would appreciate contributions in his name to the Community Health Center at 617 Riverside Ave., Burlington, VT 05401.