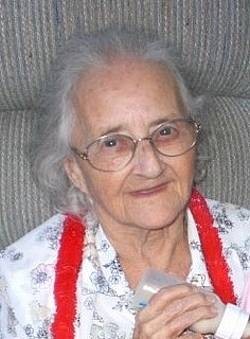 Dorothy was a devoted wife and mother of nine children. Her life revolved around children, caring for many grandchildren and great-grandchildren. She enjoyed bingo and trips to the casinos, where she experienced considerable luck, at times.

The family would like to express their appreciation to CarePartners Adult Day Center, where she spent her days for the last four years, and to the Northwestern Medical Center for the wonderful care in her final days.

Family and friends will honor and remember Dorothy’s life by gathering for calling hours on Wednesday, November 29th, 2017, from 4:00 to 8:00 PM at the Heald Funeral Home, 87 South Main Street, St. Albans.

Dorothy was a communicant of Holy Angels Church, 245 Lake Street, where her Mass of Christian Burial will be celebrated on Thursday, November 30th, at 11:00 A.M. with the Reverend Maurice J. Roy as celebrant. Interment will follow in Mount Calvary Cemetery.

In lieu of flowers, donations may be made to CarePartners Adult Day Center, 34 Franklin Park West, St. Albans, Vermont 05478.

To send Dorothy’s family a written expression of sympathy or share a memory, please go to her on-line guest book at www.healdfuneralhome.com.