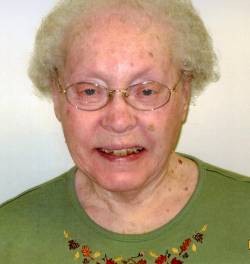 Born on August 4th, 1924, in Winooski, she was the daughter of the late Frank and Angeline (Forgette) Bissonnette. Doris was 93 years old.

Doris was educated at St. Francis Grammar School and a graduate of Winooski High School. During her working career she was associated with the Winooski Woolen Mill, General Electric and Memorial School in Winooski and was bookkeeper for the former Dufresne Oil Service. She was a longtime member of St. Francis Xavier Parish in Winooski, where she sang with the choir and a member of the Ladies of Saint Anne. While living in St. Albans, she was a communicant of Holy Angels Parish.

Doris’ family would like to thank the staff at Franklin County Rehab Center for the exceptional care they gave her over the past seven years.

In lieu of flowers, memorials may be made in the form of masses or to the Franklin County Rehab Center, Scholarship Fund, 110 Fairfax Road, St. Albans, Vermont 05478.

To send Doris’ family a written expression of sympathy or share a memory, please go to her on-line guest book at www.healdfuneralhome.com.