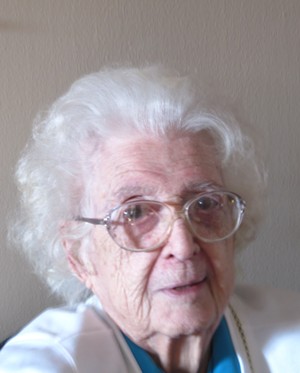 Born in East Highgate, VT on January 9, 1911, she was the daughter of the late William Joseph Sr., and Margaret Delia (Raymo) Machia. On April 17, 1933, she was married to Rodolph A. Raymond who predeceased her on September 25, 1987. She was a lifelong parishioner of St. Louis Roman Catholic Parish in Highgate Center.

The Liturgy of Christian Burial will be celebrated Monday August 25, 2014, at 10 a.m. from St. Louis Roman Catholic Church, 186 Lamkin St., Highgate Center. Father Luke P. Austin will be the celebrant and homilist. The Rite of Committal and Interment will follow at the Raymond family lot in St. Louis Cemetery.

Friends may call at The Kidder Memorial Home, 89 Grand Ave., on Sunday from 2 to 4 p.m. Father Austin will conduct a vigil service at 3:45 p.m. Father will also be available following the vigil to hear private confessions.

For those who wish gifts in Mrs. Raymond’s memory may be made to the Franklin County Home Health Agency, 3 Home Health Circle, St. Albans 05478.