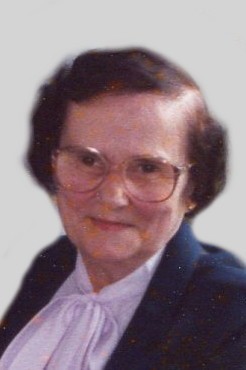 Born in Saint Albans on, November 13, 1916, she was the daughter of the late Edward Thomas and Alice Margaret (Paquette) Bouchard. She attended the former Saint Anne’s Academy and was considered a master seamstress for all of her working life. She was outstanding at designing and constructing wedding gowns. In earlier years she had worked at Softlite, Ben Franklin’s and York Manufacturing. Delma was a parishioner of Nativity of the Blessed Virgin Mary and Saint Louis Parish.

Delma leaves her brothers, Clayton and his wife Agnes of Swanton, Clifford of Swanton, Raymond and wife Nancy of Sandy Creek, New York and Norman and his wife Gloria of Swanton; a sister, Ernestine “Tina” Bouchard of Newington, Connecticut and many nieces and nephews.

In addition to her parents Delma was predeceased by brothers, Isidore, Abraham, Arnold, Roger, Lawrence and Francis Bouchard; a sister, Madeline Silva and a sister-in-law, Liza Bouchard.

The Liturgy of Christian Burial will be celebrated Thursday, March 12, 2015, at 11 a.m. from The Church of the Nativity of the Blessed Virgin Mary. Father Luke P. Austin will be the celebrant and homilist. The Rite of Committal and Interment will follow in Saint Mary’s Roman Catholic Cemetery.

Friends may call at The Kidder Memorial Home, 89 Grand Avenue, Swanton on Wednesday evening from 7 to 9 p.m. Father Austin will conduct a Virgil Service at 8:45p.m. and will remain available after for private confessions.

Gifts in Delma’s memory may be made to the charity of your choice.