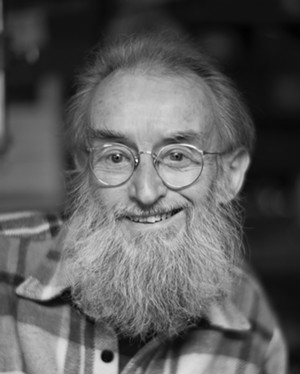 David Sawyer, 86, of South Woodbury, Vt., died peacefully at home on September 10, 2022, surrounded by his loving family. He was born on May 19, 1936, the son of David Walkley Sawyer and Sylvia Francis. He grew up in Durham, Conn.; Darien, Conn.; and Mattapoisett, Mass. He studied mechanical engineering at the Massachusetts Institute of Technology for six years in the 1950s. While getting good training there, he was also deeply involved in the Tech Model Railroad Club, where he spent many nights at what remained a lifelong interest.
In the early '60s, he worked as an engineer on various projects, including at Fellows Gearshaper in Springfield, Vt., until 1964. Not satisfied with engineering and wanting to work with his hands, he became a craftsman. His early green woodworking products included apple-picking ladders, wooden pitchforks and ladder-back chairs. In 1982, he began his long and successful career making Windsor chairs, for which he was internationally known. He made over a thousand Windsor chairs, which are, as he wrote, “simple, elegant, comfortable, strong, and light.” He generously shared all he knew with many others. Those who watched him work saw a man who, though he loved words, didn’t talk much — but who thought deeply and expressed himself in the work of his hands, whether that was mending a broken toy, sharpening the antique paper cutter from the town office or building a 10-foot bench.
Dave was a founding member of a small community of homesteaders, apple pickers, and craftspeople in Quaker City, N.H., living there until his marriage to Susan Kuntz in 1978. They moved to her family home near South Woodbury, Vt., where they raised their children. He was a lister for the Town of Woodbury for many years, work that takes careful attention to detail and a commitment to fairness. Community was important to him, and he found ways to be useful where he could.
Dave is survived by his wife, Susan, of South Woodbury; son Jonathan and his wife, Alison Mott, of Burlington; son George and his wife, Erin Smith, and their sons, Theodore and Eli, of South Woodbury; daughter Annie of South Woodbury; siblings Peter Sawyer of Connecticut, William Sawyer of California and Joan Hershfeld of California; niece Iran Narges of California; and numerous cousins and a niece in Connecticut and England.
A memorial gathering is being planned for October 22 at 2 p.m. in the Woodbury Town Hall.