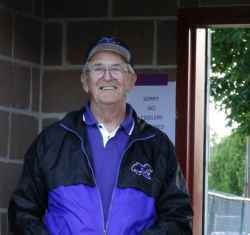 David James Cleveland a former resident of St. Albans and longtime resident of Keene passed away on Thursday December 29th, 2016, in Naples, Florida, with his family at his side.

David was a 1957 graduate of Bellows Free Academy and a Veteran of the Air Force. He was employed by the Keene Sentinel as production manager for 35 years. He was a member of the American Legion and the Knights of Columbus. He enjoyed many years volunteering for the Keene Swamp Bats.

David was the loving husband for 55 years to his high school sweetheart, Colleen and a devoted father and grandfather. Following in his mother’s footsteps he was a lifelong Red Sox fan. He was an avid fisherman. Alongside Colleen, David traveled coast to coast and most of the country. He enjoyed the company of many friends, especially those at the Keene Swamp Bats and at Citrus Park. He always had a funny story to tell, sometimes more than once. David “wasted” many evenings watching the beautiful sunsets on Barefoot Beach in Bonita Springs. David was the kindest, sweetest man you will ever know.

At his request, there will be no services; Those who wish to remember him should take a walk on the beach, play some softball, play a game of cards with friends, go fishing, or “waste an evening” watching the sunset. Messages of condolence to his family are welcome at www.healdfuneralhome.com.

He is survived by his wife, Colleen (Reynolds) Cleveland and their children, Darren Cleveland, Lori Ann Cleveland-Knoll and Beth Manzi; as well as three grandchildren, Abby Elise Cleveland-Knoll, Jay Manzi and Will Manzi; and his brother, Bill and his wife, Marilyn.