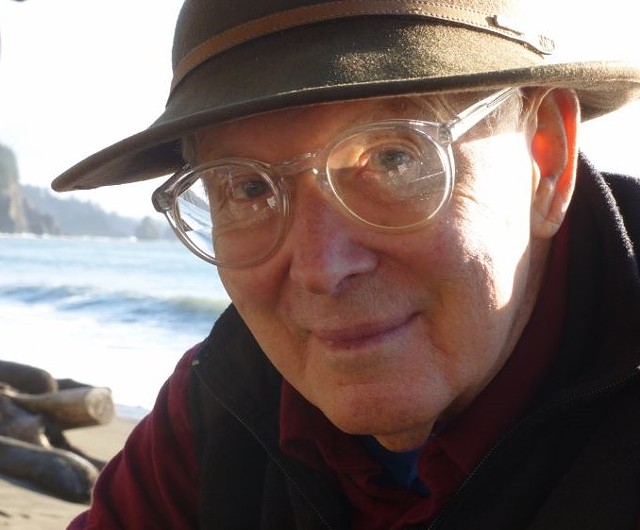 David F. Sheldon, a resident of Shelburne from 1990 to 2008, died in his sleep on Thursday, June 2, 2022, at his home on Bainbridge Island in Washington State. Born on Groundhog Day in 1929, David made full use of his 93 years with personal engagements that endeared him to many and professional accomplishments that earned him respect and admiration from his peers.

Born in New York City, David was raised in Ponca City, Okla.; Fort Worth, Texas; and, for most of his youth, Shaker Heights, Ohio. If there was a theme to these early years, it was of a boy on the move — mostly on his bicycle zipping up and down the Midwest’s rolling hills. His thirst for new experiences led him to complete his high school education at Uppingham School in the East Midlands of England. After college (Amherst) and business school (Harvard), he worked on Madison Avenue for three years before moving with the love of his life, Judy Sheldon, to Concord, Mass., where he accepted a position as a history teacher at Middlesex School. After an additional stint as director of admissions, David became Middlesex’s third headmaster, a position he held for 26 years. Upon retirement, he and Judy moved to Shelburne, where he directed the Shelburne Museum for an additional six years and where Judy taught yoga to a growing stable of devoted neighbors and friends. As a committed fan of the nonprofit sector, David also served on the boards of Shelburne Farms and Vermont Public Radio. After Judy’s death in 2005, David moved to Bainbridge Island, Wash., to be closer to his grandchildren.

David will be remembered for his humor, generosity and keen intellect. He was a mentor to literally hundreds of girls and boys during his time at Middlesex, but also to family and friends who appreciated his listening skills and wise counsel. His passion for books, dogs, small boats, fishing and bicycles continued to the very end of his life. He loved the written word and was an energetic and dedicated correspondent. Many will greatly miss the pleasure of finding one of his letters in their mailbox.

He is survived by his three sons, Fred Sheldon (Donna) of Nashua, N.H.; Charles Sheldon (Sonja) of Millsfield, N.H.; and James Sheldon (Jennie) of Bainbridge Island, Wash.; along with two grandchildren, Tyler Sheldon of Corvallis, Ore., and Jessie Sheldon of Homer, Alaska. Gifts may be made in his memory to either the Shelburne Museum or Shelburne Farms to support their educational programs.