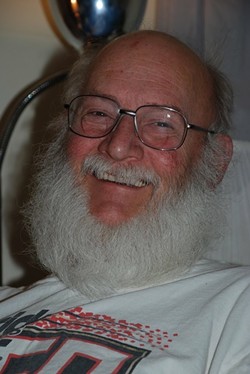 He was born on July 21, 1949 in Burlington the son of Daniel J. Jr. and Carol (Clark) O’Connell. He graduated from Burlington High School and worked several years in food service. He cared about others as well as the homeless, where he spend time at the food shelf. He volunteered as Santa Claus and as a bell ringer for the Salvation Army. Daniel loved to tell jokes, play cribbage, loved old cars, long drives around Vermont, seeking natural beauty and owls. His insight and the way he explored the world was through others and the bathroom reader. Facts and information were his thing. He could have been a Jeopardy Show contestant. He was charismatic and genuine. He would say “Hi” to anyone, no matter who they were. His smile, his long Santa beard and kindness will be deeply missed in the community. He was a light to everyone he encountered.

Along with his parents, he was pre-deceased by 2 sisters: Marguerite Wright and Judith Heller.

A private family gathering will be held on Saturday, Oct. 15 in Burlington.