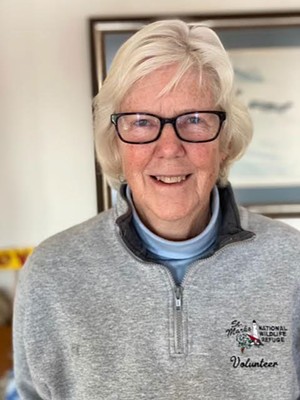 Christine Barnes, of Northfield, Vt., died peacefully at home on March 27, 2022, with her husband, Gordon Perkinson, at her side.

She was born in 1943 in New London, Conn., and grew up in Glencoe, Md., in a country house with birds, wildlife and gardens. She was the daughter of Arthur Dayton Barnes, an administrator and engineer at Johns Hopkins Hospital who was also a graduate of the Naval Academy in Annapolis and a submarine commander in World War II. Her mother was Mildred Clara Hicks, a Realtor, largely in Greenwich, Conn. Christine attended Bryn Mawr School in Baltimore, Md., and then returned in 1956 to Greenwich, where her father joined the staff of Memorial Sloan Kettering. She graduated from Greenwich Academy, active in sports and chorus, and went on to earn a degree in sociology at Syracuse University in New York.

In 1965, she married Robert Lorenz, and in 1969 she moved to South Burlington, Vt. Christine worked at the Baird Center for Emotionally Disturbed Children, where she rose to director of education. She and Robert divorced, and in 1974 Christine married Henry “Hank” Kite. She received a master’s degree in special education from the University of Vermont, worked in the Consulting Teacher Project, and also earned a master’s in education and a certificate of advanced studies in administration and planning.

In 1974, Christine moved to the public school system, becoming the federal programs coordinator in Essex Junction and then the special education coordinator, followed by director of curriculum and teacher evaluation at U-32 High School. For many years, she was principal of Jericho Elementary School and, later, principal of Twinfield Union School. She retired from Twinfield in 2006 but went back for a year as interim principal in 2012.

In 2006, Christine moved to Northfield and married Gordon Perkinson, who is active in dog therapy work, principally at the Veterans Administration Hospital in White River Junction and the Veterans Place in Northfield. Like his wife, he is also a master gardener.

For 15 years, she served as a guardian ad litem in central Vermont, working on behalf of as many as 15 children at a time — exceeding over 100 youth, ages 7 to 15 years old. Besides being a family advocate, because of her education expertise, she also served as an education surrogate in the school setting. Her focus was constantly on the welfare of the children and their needs and desires, both personally and educationally, so they could meet their full potential.

In addition, she and Gordon, for approximately a decade, volunteered at National Wildlife Refuges in Texas and Florida — sometimes for months at a time. They participated in bird counts, led bird tours, and gave school talks about the environment and climate change. In Florida, Gordon also served as a lighthouse keeper during some of those visits. She was an avid sports person her entire life — most lately hiking, birding, skiing and snowshoeing. She was one of the architects of Northfield’s Town Forest Stewardship Plan.

While she was married to Hank Kite, the two lobbied in the Vermont state legislature for Death With Dignity legislation. It was not law at the time Mr. Kite needed it in 1998, but now Christine was able to choose this option after a long battle with cancer.

Arrangements were made by Kingston Funeral Home in Northfield.

A celebration of life will be held on Saturday, May 14, 1 p.m., at the United Church of Northfield and remotely via Zoom for those who can’t attend in person. For information on the Zoom option, send a request to celebrating.teena@gmail.com. Remembrances can be shared in the Facebook group Celebrating Christine Barnes.