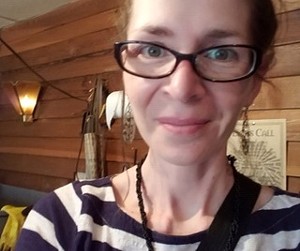 Cheryl Rose Kirby, 43, of Salisbury, passed away peacefully on December 27 at her home after a long battle with cancer. She was born on October 24, 1976, in Middlebury, Vt., to Linda and Randall Kirby. She graduated from Middlebury Union High School in 1994.

Cheryl lived in Montague, N.J., from 1997 to 2001, where she worked at High Point Golf Club. It was during her time in New Jersey that she discovered her talent and love for stained-glass artwork, which would later become an important part of her life.

She was employed at Autumn Harp from 2001 to 2013. Her most notable role was as a production supervisor, through which she displayed a wonderful knack for communicating and connecting with people. She loved her time at Autumn Harp and often spoke about her willingness to work there for free. Her retirement came only when her health no longer permitted her to work.

She spent her final years indulging in her stained-glass artwork, which she often sold or gifted to loved ones. Her other hobbies included gardening, tending to her animals, and spending time with family and friends.

She wished to express her gratitude to her father and the Addison County Home Health and Hospice for their care and support.

She will be remembered for the love she gave, the smiles she brought and her personality that truly broke the mold.

In lieu of flowers, the family asks that contributions be made to the Addison County Home Health and Hospice.

A celebration of her life is being planned for later this summer.