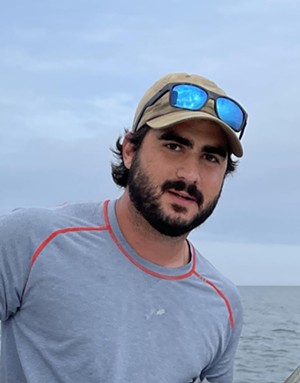 Charles Mack Vallee was born on July 18, 1994. He died on May 3, 2022. The Mack in Charlie’s name reflects his mom’s maiden name, an American version of Machoul, given to Charlie’s great-great-grandfather as he transited Ellis Island from Lebanon and moved to North Carolina. Personally, Charlie made the lives richer of all he knew; professionally, Charlie left a mark on the world of someone well beyond his 27 years.

Born in Burlington, Vt., Charlie grew up in South Burlington under the guiding hand of his brother Ted, three years his elder. Both boys attended the Mater Christi School, and the daily commute down Spear Street included a stop to pick up Charlie’s best friend, Mikey Miller. Mike, Charlie and Basa Zvarova were inseparable pals at Mater Christi.

Charlie’s youth beyond school and home was equally blessed by the 12 first cousins on his dad’s side and nine on his mom’s side. Nearly every Vermont holiday was spent in Georgia, Vt., at Gramma Betty’s with the Vermont cousins (and where Charlie dominated the pool table); the North Carolina trips were spent in Mooresville at Sitti and Giddi’s (Lebanese for grandmother and grandfather), surrounded by the southern cousins, plenty of Krispy Kreme doughnuts, the strong personality of Sitti and Lebanese food. In the north, Charlie would spend a week a summer in a northern trout camp, a trip stacked with northern cousins and sponsored by his dad’s father, Papa, who strongly influenced Charlie’s love of nature. Later in life, Charlie’s dad and uncle were able to reciprocate the sponsorship with a trip for salmon in Bristol Bay, Alaska, grizzly bears and all. The southern cousins gathered every year on the South Carolina beaches, again lorded over by Sitti.

Following the lead of his brother, Charlie spent much of his youth playing soccer on the Far Post soccer team and, in a fluke of fate while playing floor hockey with his cousin Wil, decided to become a hockey goalie, rising through the CSB youth program.

Charlie’s Vermont life was interrupted dramatically when his dad, selected by president George W. Bush to be ambassador, plucked him and his brother from Vermont to accompany him to Slovakia. The embassy was very helpful in suggesting sports teams for the boys. Unlike in the U.S., with its seasonal sports opportunities, the European system is based on year-round clubs. Charlie was forced to choose between hockey and soccer, and he chose, with the guiding hand of his brother, soccer — joining the Venglos Soccer Academy, run by a famous European trainer. Both boys were mortified when the armored limousine conveying them and Dad would drive to the edge of the soccer field to drop them off; they both also seemed to acquire Slovak swear words faster than their dad.

It was during Charlie’s stay in Slovakia that he gained a love for foreign affairs and security studies, still a preteen but absorbing all around him, intrigued by the military as he played pool with the marines in the sky-room at the ambassador’s residence — and acutely aware of a residence and travel surrounded by armed security. Charlie also acquired his rich love of hunting, accompanying his dad on weekends to small Slovak villages and the army forests to hunt red stag, mouflon, wild boar and roe deer. Because Charlie’s return to the states was midyear in the 2008 school year, he was homeschooled in Slovakia by a Slovak/American poet, to whom much of Charlie’s writing skills can be attributed.

Charlie’s return stateside was also a return to sports, primarily Far Post Soccer. But early in the season, the South Burlington hockey team was without a goalie, and someone noted that Charlie Vallee used to do that. After receiving some of Dad’s shots on the pond by the house, Charlie had enough confidence to join the team and played for the next year and a half, before repeating his junior year for two years at the Taft School, where he captained the soccer team and was the third backup goalie for the hockey team. In the one hockey game he played (against an admittedly weak opponent), he had a 6-0 shutout, so he probably leads Taft’s goals-against record.

It was at Taft that Charlie’s simmering interest in security studies began to glow — his writing improving under the inspired guidance of Mr. Magee, and his foreign affairs interest inspired by a Middle Eastern affairs course, whose pupils included a Saudi prince and an American of the Orthodox Jewish faith, a course so popular that both Taft teachers and students began to audit it. Mr. Magee suggested to Charlie that the experiences of that course could form the basis for his college applications. They did.

In the end, Charlie’s desire to play Division I soccer overcame his security interests, and he chose not to apply to the Naval Academy, opting instead to play soccer at Colgate University, where his playing time reminded him of being a Taft hockey goalie. Still, he was a leader on and off the field, and he was awarded a special scholar/athlete award his senior year.

It was at Colgate that his slow-burn interest in security studies began to flame — a degree in international affairs, four years of Arabic studies, and the only college student in the U.S. helped by an energetic Colgate professor who had a website to track jihadis. His summer internships were likewise focused — a summer in Israel at Herzliya University’s security studies area, a summer at General Keane’s Institute for the Study of War, and, finally, upon graduation, at the Washington, D.C.-based Center for Strategic and International Studies, where he resided in the Transnational Threats Group for several years and where he received the most extraordinary mentorship under Seth Jones, its leader.

From CSIS, Charlie joined the U.S. government, spending several years at Tampa, Fla., attached to Special Operations Command, which included a deployment to the Middle East. Upon his return, Charlie was awarded, among other accolades, SOCOM’s civilian employee of the year award. From Tampa, Charlie was transferred to the D.C. area, where he continued his fine work and award receipts.

Early this year, Charlie contracted COVID-19, and while weathering the mild respiratory symptoms, he was devastated by a host of long-COVID symptoms so severe that he ultimately had to reject a further deployment and, in the end, take a leave of absence from work. It was in this state that Charlie left us on May 3.

A memorial Mass will be held on Friday, May 13, 2022, 11 a.m., at the Catholic Center at the University of Vermont, located at 390 S. Prospect St., Burlington, VT. The University of Vermont has graciously set aside parking on the top floor of the parking garage by the Gutterson Fieldhouse with easy access to the Catholic Center. Donations in memory of Charlie should be made to the Charles M. Vallee Foundation for Long Covid Research, with checks now sent c/o Skip and Denise Vallee at 4043 Spear St., Shelburne, VT 05482. A website for donations will soon be made available.