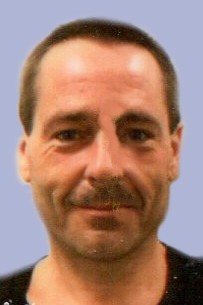 Born in St. Albans on, January 18, 1970, he was the son of Patricia (Goodroe) Burritt and the late Joseph A. Robtoy. He attended BFA- St. Albans and for most of his working life was associated with David Cameron installing aluminum and vinyl siding as well as roof construction. His hobbies included fishing, swimming, playing pool and cards.

He was predeceased by a sister, Sherry; brother-in-law, Mike; father, Joseph; aunt, Linda; both maternal and paternal grandparents; cousin, Glenn as well as several additional cousins and friends.

A Funeral Service will be held Thursday evening, October 13, 2016, at 7:30 p.m. from The Kidder Memorial Home, 89 Grand Ave., Swanton. Father Luke P. Austin will officiate. The Rite of Committal and Interment will take later at the convenience of the family.

Friends may call at the funeral home on Thursday from 6 p.m. until the hour of the funeral.

Gifts in Chad’s memory may be made to the Leukemia and Lymphoma Society, P.O. Box 4343, Burlington 05406