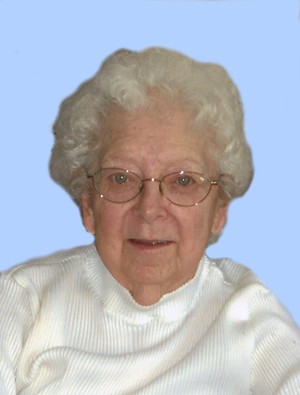 Born in Swanton, Vermont on, August 20, 1924, she was the daughter of the late Josephat and Rose (Lemaire) Boucher. She attended St. Anne’s Academy and was later married to Edward Murphy who predeceased her.

Cecile was employed at the former Union Carbide Corporation in St. Albans for 37 years and was a lifelong devoted parishioner of Nativity of the Blessed Virgin Mary / St. Louis Parish.

Survivors include her sister Rita (Ben) Ames of Burlington as well as many nieces and nephews.

In addition to her parents and husband, Cecile was predeceased by her sister, Carmen Butler, brothers, Gerard, Marcel and Jean Paul Boucher; sisters-in-law, Edna, Pauline and Evelyn Boucher and a brother-in-law, Francis Butler.

The Liturgy of Christian Burial will be celebrated Thursday, September 3, 2015, at 11 a.m. from The Church of the Nativity of the Blessed Virgin Mary, 65 Canada St., Swanton. Father Luke P. Austin will be the celebrant and homilist. The Rite of Committal and Interment will follow at the Boucher family lot in St. Mary’s Roman Catholic Cemetery.