Technical writer competed on "Jeopardy!" and advocated for size acceptance 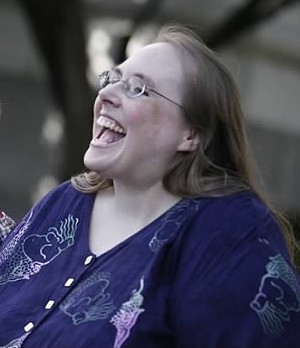 Following a lifetime of joyful struggle and relentless advocacy for self and others, Carla Joy DenHartog passed away on November 16, 2020. Born on July 24, 1969, in Urbana, Ill., she was 51 years old.

Carla was a first-generation American. She is survived by her father, Gerrit DenHartog, and predeceased by her mother, Anastasia, both of whom emigrated from the Netherlands to Canada as children in the wake of World War II. Carla always celebrated her Dutch heritage.

Carla is also survived by her partner, Andy Doucette; her stepmother, Lynne Rae DenHartog; and many American and Dutch cousins, aunts, and uncles.

Carla graduated from Kenyon College in Gambier, Ohio, in 1991, where she developed a tight-knit group of lifelong friends. Carla had a voracious appetite for books and learning, particularly about English language and literature and the cultures of the British Isles. She spent one year at the University of Exeter in Devon, England, and lived in London for a short period after graduation.

At Kenyon, Carla was involved in Harcourt Parish, the Sacred Earth Alliance, the Otisians, the Kenyon College Drama Club, and the Peeps O’Kenyon, but her deepest passion was for the Kenyon College Chamber Singers, a touring chamber choir made up of the very best choral singers on campus. Among her Kenyon friends she was known as the keeper of happiness, mistress of organization, and Otisian Saint of Whatever the Hell She Wants.

Carla was indeed a magnificent singer. From an early age, Carla sang in the choir at church, and loved '80s music, particularly ABBA and Duran Duran. After moving to Vermont in 2002 she formed a pop-rock band, the Heaters. Carla sang lead and always had audience members up on their feet and dancing.

She spent most of her career as a technical writer “translating Engineer into English” on documentation for medical software. She knew the power of words and the impact of a well-placed expletive but did not dilute that power by using such words casually. A lifelong advocate of the Oxford comma and clear writing in general, Carla once said, “I did not choose to be an English major to become like this; I chose to be an English major because I am like this.”

Her knowledge of obscure, esoteric, and eclectic trivia enabled her to compete on "Jeopardy!" in 2004, where she came in second to Ken Jennings in the ninth game of his record 74-game winning streak.

As a self-described fat person, Carla was a strong advocate for size acceptance. She was also a staunch feminist and ally to the LGBTQIA+ communities. She was a supporter of Black Lives Matter and Planned Parenthood and advocated for the full inclusion of people with disabilities. She stood up for labor unions and universal health care. She used her powerful, articulate, and educated voice to lift others up whenever she could.

She lived in South Burlington with her partner of 12 years, Andy Doucette, and was predeceased in 2019 by their cat Abenthy “Ben” DenHartog. Carla and Andy enjoyed reading together, including The Name of the Wind and Harry Potter; watching "Star Trek," "Dr. Who," "Game of Thrones," "Deadwood," and "Peaky Blinders"; and wishing there were more seasons of "Firefly." They also enjoyed playing video games, board games, card games, and other tabletop games with family and friends.

Carla was buried on Wednesday, November 18, 2020 in Green Mount Cemetery in Montpelier. Memorial donations can be made to Emerge Vermont, the American Civil Liberties Union of Vermont, or to the Brown Family Environmental Center at Kenyon College. A celebration of her life will be held on her birthday, July 24, 2021, in Montpelier. Contact christopher@vermonthumanities.org for more information.