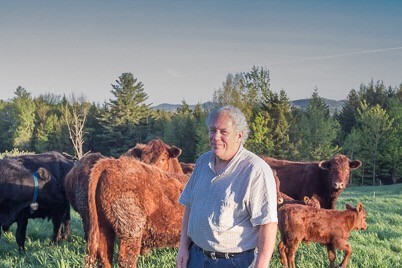 Carl Powden, the longtime central Vermont regional director for the Vermont Land Trust, passed away suddenly on Wednesday, January 12, 2022, while engaged in a labor of love — retrieving rotten squash for his pigs from a local coop. The task combined two of his passions: animal husbandry (in the large forms of Stella and Maybelline) and parsimony.

Carl was born in Norfolk, Va., on October 25, 1954, to Joseph Fanning Sullivan and Drusilla (Sullivan) Powden, and his early life featured a tour of three of the nation’s major ports, as his father’s duties in the family stevedoring business dictated.

Following his father’s death, his mother was married for a second time several years later to Russell S. Powden. In 1965, Carl and the family moved to Peacham, Vt., where he was raised.

Carl graduated from Lyndon Institute and in 1976 received an AAS in dairy herd management from Vermont Technical College. He went on to earn a BS in animal science and education from the University of Vermont in 1978. After graduation, he followed in the footsteps of his grandmothers to become a teacher — teaching vocational agriculture in Addison and Lamoille counties. He also worked as a self-employed logger, and he owned and managed a herd of 60 registered Holsteins on a rented farm in Hyde Park.

In 1988, Carl decided to run for the General Assembly to represent his home town of Johnson, as well as Eden and Belvidere. Carl characteristically worked hard at it, knocking on the door of every home in the district. He defeated a longtime Republican incumbent and was elected as the district’s first Democrat in memory, a fact he frequently reminded his successor and friend, Mark Woodward, for whom he blazed the trail.

During his three terms in the General Assembly, Carl helped lead efforts to respond to the Vermont Supreme Court’s Brigham decision, which required greater equity in school funding among Vermont towns. As vice chair of the House Education Committee, he worked closely with Paul Cillo, David Larsen, Martha Heath and others to devise a way to fund education without relying so heavily on the property tax.

Their efforts bore fruit in the form of Act 60, enacted in the years after Carl left the legislature and joined the Vermont Land Trust. During his nearly 30 years at VLT, Carl was instrumental in conserving some 200,000 acres of Vermont’s farmland, forests and other areas important to communities, a third of all the land that VLT has helped protect in its history.

Carl brought his work home, after a fashion. He hated debt, so when he moved to Johnson, he insisted on paying cash. As a result, the property he bought, while blessed with 60 beautiful acres, was a bit of a fixer-upper. Grudgingly, he installed hot water and electricity, and soon he was raising sheep, chickens, pigs, a succession of beloved border collies, horses and a small herd of Salers, the famous breed of cattle from the Massif Central in France. He had a bountiful vegetable garden, a full root cellar and a busy, when not burning, smokehouse.

Over the years, Carl made one improvement after another. As his annual cider party grew bigger and bigger, he of course had to add a building for his antique apple grinder and cider press, and another to house the pizza oven. And for the past several years, he had been pushing back the forest — cutting down trees and then running pigs on the land to add to his pasture.

But the biggest improvement in Carl’s life came 20 years ago, when he was reunited with his high school sweetheart, Dorigen Keeney, whom he married on the land where he now lays. She was the love of his life and its completion.

In addition to Dorigen and his mother, Carl is survived by his brother, Mark Powden, and his wife, Wendy Lawrence, of Washington, D.C.; his sister, Meg Powden, and her wife, Jean MacDonald, of Montpelier; his nephews and niece, Russell Powden, Joseph Powden, Cory MacDonald-Powden and Brooke MacDonald-Powden; his brand-new great-nephew, Logan; and Courtney and Tom Cramer, the children of his first wife, Linda Cramer, from whom he was divorced.

Carl was buried in a small ceremony on Saturday, surrounded by his family and friends, amid laughter, tears and fond memories of a man who will be deeply missed by many. A larger celebration of his life will be planned when the pandemic has subsided and public health permits.

Those wishing to do so are encouraged to make a donation to a charity of their choice. And, while he certainly would hate the attention, feel free to do so in the memory of Carl Powden. Among Carl’s preferred charities were two land conservation organizations: the Vermont Land Trust (vlt.org) and Cold Hollow to Canada (coldhollowtocanada.org).