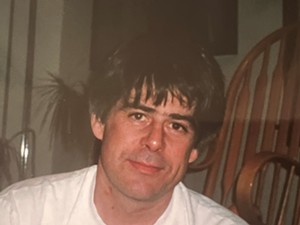 Bryan Harold Anderson, 60, passed away on October 12, 2022, at his home in Milton, Vt., surrounded by his loved ones. Bryan was born on February 21st, 1962 in Waterbury, Conn., as the son of Harold Anderson and Doran (Snyder) Anderson. He bravely battled rectal and liver cancer for five years and carried that fighting spirit with him when he passed

Bryan was a self-employed painter (Fluid Motion Painting) for the majority of his working life. Known for his tireless work ethic and attention to detail, he continued painting into his final months of life and was often heard saying, “It takes a lot to do a little.”

Bryan was a natural athlete. Growing up, he excelled in competitive swimming and diving, skiing, and tennis. He attended Vermont Academy in Saxtons River, where he fell in love with the outdoors. After graduating from Vermont Academy, he attended the University of Vermont, where he met his future wife. Before settling down, Bryan moved west to Squaw Valley, Calif., to pursue his passion: skiing. He skied all the extreme lines and chutes with the best skiers of the day. A photo of Bryan launching into the chutes of the Palisades in perfect form will live on forever.

Upon returning to Vermont and raising a family, Bryan would never pass up an opportunity to get out on the golf course with his sons, take his family waterskiing on the family boat or crack open a beer with his dearest friends. In his last months, he loved watching his favorite shows with his partner, Tanya, and spending time with his loved ones.

Bryan is survived by his mother, Doran Anderson, of Williston; Brook Anderson and his wife, Laura McNally, of Essex; his two sons, Jared of East Northport, N.Y., and Teagan of South Burlington; his partner, Tanya Lavery, of Colchester; and all those who love him. He is predeceased by his father, Harold Anderson.

A celebration of life will be held at a future date. Contributions in Bryan’s name can be made to the American Cancer Society (cancer.org). Arrangements are being handled by Minor Funeral and Cremation Center of Milton (minorfh.com).