ESL teacher made many lasting friendships through his work 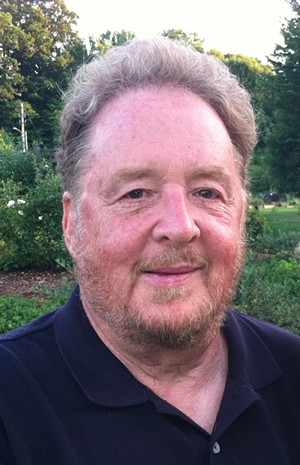 Lester J. Knepp Jr. of Weybridge, Vt., known to everyone as “Bo,” passed away Saturday, September 26, 2020, after a fall on his property. He was 76 years old. Bo was a gregarious and friendly soul and a larger-than-life character who enjoyed good music; good books; and the company of neighbors, friends and family.

He was the son of Colonel Lester J. Knepp and Nicky Knepp, both deceased, and was brought up as an army brat, traveling the country and the world with his brothers Greg and Joel Knepp. Although he had lived in Germany, Saudi Arabia and all over the United States, Bo felt right at home as what he called a “Vermont bubba,” swimming in Otter Creek every warm day, walking the local trails, exploring back roads in his pickup or just mowing his lawn.

Bo graduated from Frankfurt American High School in Germany and Western Maryland College. After college, he began and then blew off a doctoral fellowship at Emory when he realized the bureaucratic academic lifestyle was not for him, and he went on to complete his education with a master’s degree in English as a second language (ESL) at Hunter College in New York City. Bo spent his working years writing, editing and teaching English to immigrants. He made many lasting friendships through his work with the Bosnian community in Vermont.

He had an interest in all of the arts and an eclectic taste in music; he liked blues, country and their hybrids, but he also enjoyed everything from John Coltrane to Tchaikovsky. He was deeply passionate about the English language and its rich literature, and he had numerous volumes of books both rare and mundane. He was also proud of the fact that he spoke Spanish like a native Puerto Rican, thanks to his many buddies in Hoboken, N.J.

Bo always had a powerful drive to give back to his community and dedicated many hours throughout his life to volunteering for various organizations, including the Trail Around Middlebury and the Weybridge Volunteer Fire Department, where he liked to boast that he underwent grueling training exercises side by side with “strong young folks.”

His life adventures included a tour in Vietnam as an Bronze Star-decorated army war correspondent (followed by several arrests for protesting the war after his return home); a brief stint at a hippie commune in Brooklyn (until he was kicked out for having less than favorable views of chairman Mao); a job running an ESL program in Hoboken that required him to cut his flowing ’60s-era hair; six years teaching English in Saudi Arabia while learning Arabic and making liquor in the bathtub to skirt the country’s alcohol ban; 17 years as a small-time real estate mogul in fast-gentrifying Hoboken, N.J.; and exciting trips with his young family to India, Egypt and beyond.

Bo is survived by daughter Veronica Knepp, daughter Tanya Knepp and son-in-law Dylan Mader, and grandsons Santiago, Joaquin, Octavio and Viggo, all of Hoboken, N.J.; and brother Greg Knepp and his partner, Kathleen Baylis, niece Roxanne Knepp, brother Joel Knepp and his wife, Lynda McClanahan, all of Columbus, Ohio. He grieved the premature loss of his beloved son Danny at the age of 22 in 2004. He will be terribly missed by all who knew and loved him.

If you would like to make a donation in Bo’s memory, please consider the Middlebury Area Land Trust (maltvt.org/donate-1) and the Weybridge Volunteer Fire Department (paypal.me/weybridgefire). Condolences, photos and memories can be shared through sandersonfuneralservice.com.