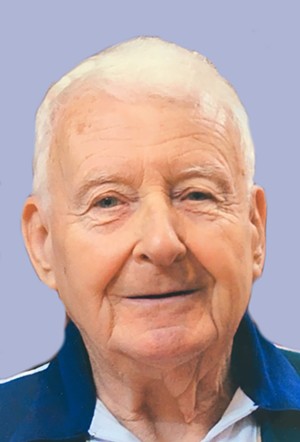 A native of Swanton, Bernard has resided in the Waterbury and Duxbury, Vermont areas for many years as well as wintering in Zephyrhills, Florida.

Born at home in Swanton on, September 21, 1936, he was the son of the late Raymond E. and Adele M. (Giroux) Moreau. He graduated from the former St. Anne’s Academy in 1956 and later in 1976 from the Community College of Vermont.

For 27 years Bernard worked as a physician’s technician and assistant supervisor for the Vermont State Hospital in Waterbury retiring in 1996. In earlier years he had worked at the Missisquoi Pulp Mill and also as a meat cutter for Prouty’s IGA.

He was a lifelong parishioner of Nativity of the Blessed Virgin Mary – St. Louis Parish and while living in the Waterbury area attended St. Andrew’s Roman Catholic Church. He was a longtime friend of the late Father Louis Logue. He was a member of the Knights of Columbus, St. Edmund of Canterbury Council # 7669 in Swanton and the Father Galligan Fourth Degree Assembly # 2250 in Waterbury. He was also a member of the Swanton Chamber of Commerce.

Bernard leaves his sister, Doris St. Pierre and her husband Wilfred of Fairfield, a brother-in-law, Joseph Gamache of Swanton; 13 nieces and nephews, many great nieces and nephews and close family friends, George and Sherri Welch.

He was predeceased by a sister, Anna Gamache; a brother, Henry Moreau and his wife Jacqueline and a very dear friend, Marie Trahan in 2008.

The Liturgy of Christian Burial will be celebrated Saturday, May 7, 2016, at 11 a.m. from The Church of the Nativity of the Blessed Virgin Mary, 65 Canada St., Swanton. Father Luke P. Austin will be the celebrant and homilist. The Rite of Committal and Interment will follow at the Moreau family lot in St. Mary’s Roman Catholic Cemetery.

Gifts in Bernard’s memory may be made to Missisquoi Valley Rescue, P.O. Box 22, Swanton 05488.