Acupuncturist remembered for his passion and commitment to Chinese healing arts, break dancing and weightlifting 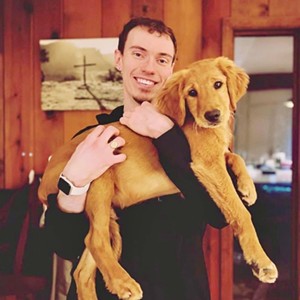 Dr. Benjamin Clark Watson passed away unexpectedly in his sleep on October 15, 2022, at his home in Columbia, S.C., just shy of his 32nd birthday. He was born in Littleton, N.H., and spent his childhood in Wisconsin and later in Vermont.
Ben earned his bachelor of science degree from Northern Vermont University in wellness and alternative medicine. After graduating from NVU, he earned his master's and doctorate degrees in acupuncture and Chinese medicine from Daoist Traditions College of Chinese Medical Arts in Asheville, N.C. He traveled to China, India and Bhutan to increase his understanding of Eastern culture. He recently visited the Potala Palace in Lhasa, Tibet, the winter palace of the Dalai Lamas. He was a student of the world-renowned Chinese medical master and 88th-generation Daoist Priest Jeffrey Yuen. For the past three years, he worked at Palmetto Acupuncture and Holistic Health Clinic in Columbia, S.C.

Whether he was mastering techniques of the classical Chinese healing arts, spinning on his head or simply brewing tea, Ben was passionate, curious and fully committed. He loved helping people and never passed a dog without giving it a pat. His coworkers will fondly remember hearing the bass thump from his car as he arrived at work and the joy he spread with his bright smile, infectious laugh and gentle kindness. In the past year, he read his Bible every day. He would remind patients to have faith and count their blessings.

Ben’s dozens of notebooks with meticulous notes show his discipline and commitment to Chinese medicine, break dancing and weightlifting. He performed with the Rhythm Ryderz on Church Street in Burlington, Vt., and often danced at jams in Montréal and Boston. He had an encyclopedic knowledge of hip-hop culture. He drew beautiful graffiti and spent hours mixing tracks of music. He was blessed with wonderful friends who shared his passions.

A celebration of Ben’s life will be held on Sunday, October 30, at 4:00 p.m. at Bevo, 70 Roosevelt Highway, Colchester, VT, 05446. It will be filled with the music and friends that Ben loved, and all are welcome. If you have a memory of Ben you would like to share, please post it on the Tribute Wall at dignitymortuarysc.com. If you would like to make a donation in Ben’s memory, please give to your local Humane Society.