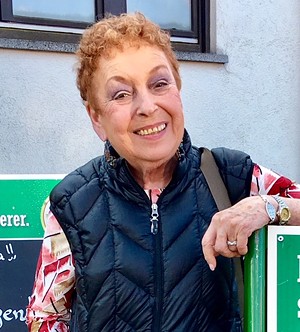 On Sunday, August 26, Barbara Lee Silver from the Bronx, N.Y.; Framingham, Mass.; and Stratton and Colchester, Vt., passed away from a sudden illness.

Known to many as “Gibby” (the nickname given by her granddaughter), Barbara was one of a kind and leaves a big hole in all our hearts: husband, Lee, of 54 years; daughter, Barrie Hope, and son-in-law, Gary Coffey; son, Scott, and his wife, Lori; two treasured grandchildren, Mira and Jacob; and her beloved Glen of Imaal puppy, Guinness.

But there was a lot more to our Gibby. After telling people about her passing, it was obvious that she left a piece of herself with everyone she met: her fellow congregants, cooks and kitchen helpers at Ohavi Zedek Synagogue; her many neighbors and friends from the Ladies of the Lake in Colchester; food lovers and “food gurus” in Burlington (and beyond); and many, many more.

She traveled around the world, went on over 30 cruises, skied all the Alps (in Argentina, New Zealand, Canada, and the U.S. West), and did countless runs over 45+ years in the mountains of Vermont. She left a trail of relationships with everyone she met — fellow travelers, lifelong learners and chefs.

Her home in Colchester allowed her to showcase her skills as a chef and BBQ “Pitmaster.” She could taste a recipe just by reading it, and her cooking was so adventurous that being at her table was often an international experience, like visiting the UN.

She was known to tell it like it is and told everybody about her life and her views — whether it was food, sex, books, history, religion, politics or wine. (She loved her wine!) Gibby was passionate about lots of things, especially the connections between cultural heritage, food and family. She valued educating young people about traditions and where their families came from, and she believed we should all keep learning, experimenting and growing throughout life.

Our Gibby — our Barbara — was special. She was spunky, fun and generous; vibrant and sharp-witted; spirited and energetic; and full of happiness and connection. We hope you met her and remember her smile, her laugh, the twinkle in her eyes, and her passion for life, food, dogs and people.

Barbara’s family plans to establish the “Gibby Fund” to support two things she loved: food and education. Details to come...