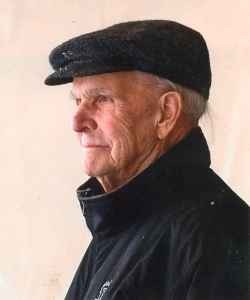 We lost a great man on June 2, 2016. Arthur E. “Art” Christie passed away. He was a lively 89 year old, living alone since his “sweetie” passed away in October, 2010. He was asked many times if he wanted to live with one of his children, and his response was always the same “No, I am ok, and I like my company more than anyone else’s”. He was fiercely independent, driving his truck through town until the last week of his life.

He spent his life, supporting and encouraging us through whatever endeavor we wanted to pursue.

We only had to “try our hardest” and if we “started something we had to finish it”, this staying with

us to this day.. Even after we graduated from high school he would go up and catch a game or an

activity we were involved in as adults. There would be “Big Art” standing in the Complex stands,

coffee in hand, watching us play hockey in a men/ women’s adult league.

As both our parents would expect us to do we will go on with our lives. We will celebrate the man he was and not mourn how much he will be missed. He will be missed more than anyone can imagine, for who he was; For his wit, empathy, compassion, his humor, tenacity and most importantly his love.

When it was his time to go, he went on his own terms. He went with his love and he knew he had

ours. He had a great run, and we were lucky and blessed to have him in our lives as long as we did. For that we are ever grateful.

Art was born on December 28, 1926, in Williamstown, VT the youngest of 14 children of William and Elizabeth (Reid) Christie. On November 29, 1952, Art married his childhood sweetheart Mildred

“Millie” Rogers. They enjoyed 57 years of marriage, (as well as being best friends) until she passed

Art was educated in the Barre, VT school system and enlisted in the service. He served his country

during WWII , honorably discharged in 1946. Working for Perry Ford in Barre, VT and then Herberg’s

Auto, Montpelier before moving his family to St. Albans to be a partner of a local Auto parts store, a

position he held until the mid1970s. Next venture was to buy a neighborhood store on Barlow St. ,St. Albans: Christie’s Market ,for many years. He was also a licensed real estate broker during that time.

He fueled his lifelong passion of community service by becoming involved with youth sports in St.

Albans. He was a president of the St. Albans Little League and along with his close friend Dick

Hungerford, was one to the founding members of the St. Albans Skating Association. He was also

involved in the St. Albans Chamber of Commerce and several City of St. Albans activities.

He was a man of many interests, including animals, the arts, life in the country and at the lake. He

was an avid reader and devoted follower of both the Red Sox and Bruins. His 89 years produced

many, many friends and acquaintances though his activities and through those of his family. He

He is survived by his four children, Lisa Christie, Greg Christie, Tim Christie and wife Betsy and Dee

great-grandchildren, and one sister, Gladys Lafreniere of Florida.

In accordance with Art’s wishes, there will be no services. Supporting his dedication to the youth of

Assisting Art’s family is the Heald Funeral Home, where messages of condolence are welcome at www.healdfuneralhome.com.