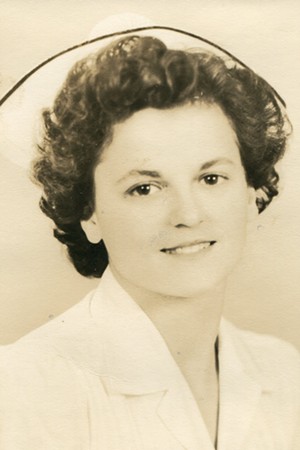 Armande Renee “Fugie” Daniel 88 years old peacefully passed away in Starr Farm Nursing Center during the evening on Sunday, September 28. She was born on June 30, 1926, in Highgate Springs, VT, daughter of Antoinette (Milotte) and George Messier. She married Gerard “Jerry” Daniel on a snowy November day in 1949.

Renee and Jerry led a life full of adventure and happiness. Family was very important to Renee and she stayed in constant contact with her beloved sisters and brothers, and her many relatives.

Renee and Jerry extensively traveled, with their daughter and as a couple, for both business and pleasure to the continents of North America, Asia, Africa, and Europe. In 1954, they practiced medicine as a couple in Brattleboro, Vt., they moved to Washington, D.C. in 1951 so that her husband could begin a position with the government. In 1970, they relocated to Tokyo, Japan and spent three thrilling years living and learning about this exotic Asian culture. They returned to the United States in 1973 and kept a house in their beloved hometown of Swanton, VT, where they raised their daughter, and an apartment in NYC so that Jerry could continue his career as the chief executive officer of Lipha Pharmaceuticals, Inc.

Renee loved to cook and took great pride in preparing dinner parties for family and friends while living in Arlington, Virginia and Vermont. A creative individual and wonderful artist, Renee taught herself to paint using both acrylics and watercolors, made unique candle creations at her home in Virginia, and learned the ancient art of Ikebana in Tokyo, Japan where she lived from 1970 to 1973. Renee was a natural caregiver, she took pride in being a wonderful wife and mother, but her natural instincts went far beyond just her immediate family. She was the caregiver to her mother for many years; she volunteered her services from children’s cooking class in the late 60’s to volunteering her time at Sloan Kettering Hospital in Pediatrics Oncology during the 80’s.

Renee attended Ste. Anne’s Academy in Swanton and graduated in 1949 from the Fanny Allen School of Nursing as a registered nurse. She worked as an operating room nurse at the VT Medical Center, practiced medicine with her husband (a medical doctor) in Brattleboro, VT, was a staff nurse at St. Johns Nursing and Rehabilitation Center in Fort Lauderdale, and was the health coordinator for St. Patrick’s Cathedral while living in NYC.

She is survived by her daughter and son-in-law Suzanne and Stephen Foley of South Burlington, VT and grandchildren Nicole and Cullen Foley; one brother Charles and his wife Cecile Messier of Manchester, CT; two sisters Charlotte DeCampos of Manchester, CT, and Constance Cremer of Dover, DE; sisters-in-law Cheryl Messier of Swanton, VT, Roland Messier of Bridgeport, CT, and Yvette Messier of Santa Clara, CA; and many nieces and nephews, especially Marilyn and Roger Livingston.

The Liturgy of Christian Burial will be celebrated Saturday October 4, 2014, at 10 a.m. from The Church of the Nativity of the Blessed Virgin Mary, 65 Canada Street, Swanton. Father Thomas D. Nadeau will be the celebrant and homilist. The Rite of Committal and Interment will follow at the family lot in Saint Mary’s Roman Catholic Cemetery.

Friends may call at The Kidder Memorial Home on Friday from 5 to 7 p.m.

On line condolences may be directed to Renee’s family by way of www.kiddermemorialhome.com