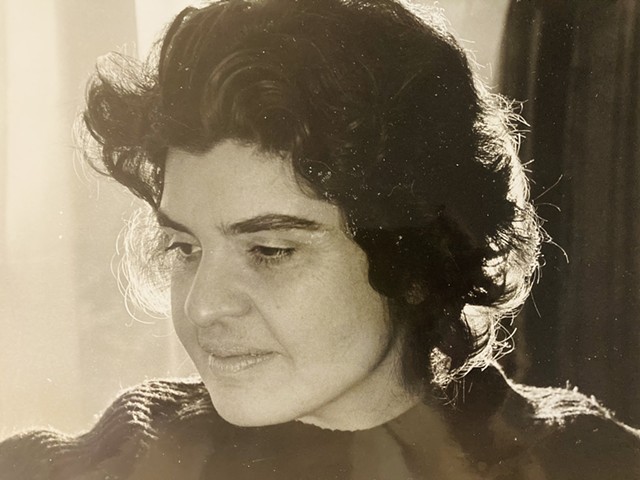 “You’ll never get married; you laugh too much,” Geraldine told Anne. They were hospital mates — children in the polio ward at Bellevue Hospital in New York City. But Anne Adoian Nalbandian Bemis paid no heed to Geraldine — she went on to live a long and accomplished life full of laughter — and marry she did.

Anne always said she was born lucky, having come into this world on the auspicious date of 3/3/33. She was born in New York City’s Chelsea neighborhood to Lucia Adoian Nalbandian and Paul Nalbandian, survivors of the Armenian genocide. (Lucia’s cousin was renowned artist Arshile Gorky, born Manoug Adoian. Art was in Anne’s blood...)

Both sides of her brain worked in a beautiful balance. Despite her physical handicap and years in and out of the polio ward, she excelled in academics, skipping two grades. Upon graduation from the all-girls’ Washington Irving High School (which Anne referred to as “Washing and Ironing High School), the CIA tried (unsuccessfully) to recruit her.

Anne graduated from Hunter College, where she studied statistics and physiology. She studied biostatistics at Columbia University and art at the Art Students League and the New School, and she began graduate work at Cooper Union. She left when she married, and then soon after became pregnant with her first child. Anne put her statistics degree to good use while working for Nielsen ratings in New York City and at the Vermont Department of Health. A prolific painter, she studied with Robert Motherwell and Richard Pousette-Dart. During her lifetime, Anne showed at a number of galleries throughout North America and went on to launch the Vermont women’s art group Visiblity Arts in the 1970s. Her “Lake Series” collection is a love letter to Lake Champlain, painted over many decades.

There isn’t the space here to list Anne’s accomplishments. She would tell you that she had a great life and she was the luckiest woman in the world. She knew true love with Edmund Augustus Bemis Jr. (1928-2012), whom she met while walking their dogs in Washington Square Park (you can hear about their meeting and lifelong love at vpr.org/post/story-enduring-love-started-dogs-and-jazz#stream/0). She was immensely proud of her three daughters, Mary, Lucy and Amanda, and she found tremendous joy in her grandchildren, Béatrice and Tobias.

Though she had a direct connection with some of the worst of human experience — genocide and polio — she concentrated on the best. Anne lived true to the Armenian maxim, serged line ede — "make your heart wide.” Her outlook was always positive; her sense of wonder and her pursuit of knowledge were insatiable and remained with her until her last breath.

Anne was a brilliant thinker and doer. Having moved to Vermont in the 1960s, she was at the forefront of the arts and politics scenes and, along with husband Ed, played a pivotal role in bringing jazz and art to Vermont. She helped launch the Vermont Progressive Party, worked tirelessly with the American Association of University Women, Historic Preservation and UNICEF. She taught at Pine Ridge School, where she wove her love of the arts into her lessons. Anne was known for her deep and lasting connection with her students. Her lessons were punctuated with laughter, which could be heard throughout the halls.

Over the years, Anne also taught cooking classes and art classes. She was an outstanding cook (she once called Craig Claiborne to ask how he boiled his eggs), and she knew how to throw a great party.

Anne was fearless. She loved people, and she loved life. Throughout her 88 years and in spite of her physical challenges, she remained fiercely independent. She died peacefully at home on March 30, 2021, with her three daughters by her side. She went with a smile on her face, a full heart and no regrets.

A celebration of Anne’s life is being planned for the summer. To share a memory of Anne or send a condolence to her family, please write to thebemisthree@gmail.com.