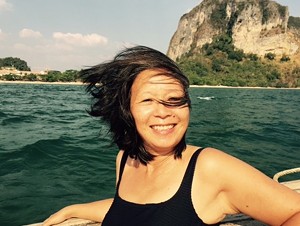 Our luminous mother, sister, daughter and friend, Anna Sun, died peacefully in hospice care on Saturday, October 15, after a brief and intense battle with pancreatic cancer. She was 60 years old. We will always remember Anna’s generosity, vitality, dedication to friends and family, and love of song.

Anna was born in Princeton, N.J., on April 27, 1962. Her parents were both first-generation immigrants to the U.S. Her mother, Lihua Yu, was a renowned writer; her father, Chih-Ree Sun, was a physicist. Her parents both remarried when Anna was in high school. Her stepparents, Vincent O’Leary and Felicia Sun, cherished Anna. Anna was raised for the first five years of her life in Taiwan by her maternal grandmother, Liu Hsing Ch’ing. This experience affected Anna deeply, creating a lifelong connection to her Chinese heritage and culture. After returning to the U.S., Anna lived in Queens and Schenectady, N.Y. She moved to Middlebury, Vt. for college and spent most of the next 42 years there.

While at Middlebury College, Anna met her husband, Tom Vanacore. They married in 1983, then moved to Florence, Italy, where their daughter, Tara, was born. They lived in Italy until 1985. Their son, Michael, was born when they returned to Vermont. Anna and Tom divorced after 11 years but remained important parts of each other’s lives.

One of Anna’s greatest joys was becoming an abo and nainai (grandmother). She spent some of her happiest days exploring Washington, D.C., and Vermont with her three grandchildren.

Anna was a loyal friend who loved to cook, swim, bike and make music with loved ones. Whether performing on stages across the state with her beloved Womensing singing group, telling a story on the Moth radio hour, acting in a community theater production or hosting a dumpling-making party at her apartment, Anna sought and embodied community. Anna’s friends and family traveled from across the country to accompany her during her final weeks. The fact that she was never alone during her illness speaks to how much she supported the people in her life. Anna loved to travel, learn languages and hear stories about people’s histories. Her door was always open, and her home was a space for people facing adversity in their lives.

From 1995 to 2014, Anna worked as the coordinator for the Chinese School, Chinese department, French department and Japanese department at Middlebury College. Subsequently, she worked as a caregiver, a babysitter and a tutor. In the past year, she developed a curriculum to help local students become bicultural and biliterate in Chinese. After pausing her college education while raising kids, she earned her bachelor’s degree and an ESL certification by taking classes at Johnson State College and Saint Michael’s College in Vermont. During the pandemic, Anna devoted hours to reading her mother’s short stories in Chinese, working virtually with teachers in China. After her mother’s death in 2020, Anna advocated for her writing to be translated into English, a project that we will continue in her honor.

Anna was grateful to the surgeons and oncologists at UVM Medical Center and to the exceptional nurses on Miller 5 and Baird 3 and 6. The family would especially like to thank Dr. Carlos Marroquin for his belief in her to the end. Anna could not have found a better final home than the McClure Miller Respite House in Colchester, Vt. Deep gratitude goes to Dr. Diana Barnard for guiding us through end-of-life decisions. Please direct donations to the Respite House or to the Lois McClure-Bee Tabakin Hope Lodge in Burlington, which provides free lodging to cancer patients and caregivers.

A memorial service will be held on Saturday, November 19, at 10:30 a.m. at the Champlain Valley Unitarian Universalist Society in Middlebury. The service will be live streamed and recorded. All are welcome to celebrate Anna’s life.

Arrangements are under the direction of Sanderson-Ducharme Funeral Home; online condolences may be left at sandersonfuneralservice.com.