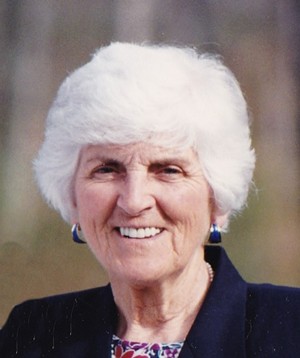 She was born in Barre, Vt, the daughter of Gervasio Garcia and Isabel Ontanon Garcia, both from the Province of Cantabria, Spain. She was a graduate of Montpelier High School in 1936, first working for Triple A in Montpelier VT and then moved to Washington DC to work for the Pentagon during the second World War. On June 22, 1945 , she married Donald W. Benjamin and they moved to Middlebury Vt , established Benjamin Brothers Dry Cleaners and raised their family. Anita worked for many years in the Insurance industry, beginning with Cooperative Fire Insurance of Middlebury and finally retiring from the Insurance Industry in the 1980's. Anita was a passionate collector of antiques, loved American History and was able to satisfy that love by becoming a guide at the Shelburne Museum for the next 18 years, those years being some of the happiest of her life.

Anita possessed a keen interest in politics, was an avid reader, enjoyed skiing and golf and played Bridge well into nineties. This past year on her 95th birthday, she was fondly remembered by many at the Essex Junction Senior Center at which she volunteered for several years.

She is survived by Trudy Martin of Portland, ME, Nancy Shea, Morgantown, WV, and Robin Noble and husband Spencer of Essex Jct, VT.

Anita is predeceased by her brother, Julia Garcia of Barre VT, and Olga Gomez, Montpelier, VT.

The family would like to thank her longtime caretaker, Dawn Bain, of Colchester for all her care, support and kindness to Anita and the family.

Contributions to her memory can be made to The Essex Rescue, One Educational Drive, Essex Jct, Vt 05452

Anita's ashes will be interred a later date this Spring.