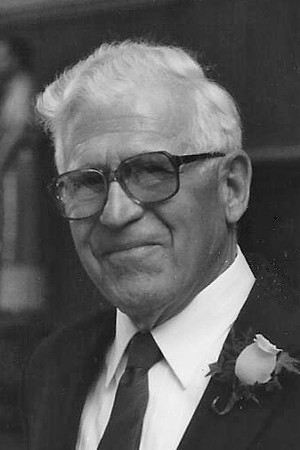 Albert S. Nadeau, 97, died peacefully, surrounded by his loving family at Copley Hospital on Sunday, May 26, 2013.

He was born on February 6, 1916 in Chicopee, MA, the son of Alfred and Elmire Nadeau, who shortly thereafter moved their young family to a farmstead in Johnson.

He married Anita Fournier of Johnson on July 9, 1940, and together, raised their nine children.

Albert led an active outdoor lifestyle, and was involved in all sorts of heavy construction and mining his entire adult life. He enjoyed gardening, hunting, fishing, and snowmobiling, and raised AKA beagles for competition trials at venues throughout the northeast.

He joined the Army as a volunteer at the Albany, NY induction center in 1942, but his orders were soon rescinded by Washington officials when they realized that his many talents would be better utilized serving the war effort for the Defense Plant Corporation. His special "knack" for anything industrial, was put to use at several mines in the Adirondacks, which had been nationalized by President Roosevelt, with an intense focus on mining titanium for aircraft, and other military applications. He worked tireless hours on special welding projects and associated equipment.

When WWII ended in 1945, he moved his family to their current location in Johnson, where he founded Albert S. Nadeau Washed Sand and Gravel, the sand and stone company in operation to this day.

Albert was often consulted by others on various subject matters throughout the years, as his council was well respected regarding his humble, expert opinions and vast experiences. He was well known for his immense knowledge of three-phase electrical power, and special welding techniques, especially the difficult task of joining dissimilar metals, in addition to his many other natural attributes.

He was predeceased by his first wife, Anita, the mother of his children, in 1996, and his brother, Roland, and sister, Vivianne Dezaine.

He married Jean Tourville on January 1, 1999. She added eight of her own children into the family, and several grand and great grandchildren. Jean has been a loving and constant companion and caregiver to us all through sickness and health.

Funeral services will be held on Saturday, June 1, 2013, also at Saint John's, 12:00 p.m. A burial service will follow at Lamoille View Cemetery, with a reception at VFW Post 7779 in Hyde Park. All are welcome and encouraged to attend.

Arrangements are in the care of des Groseilliers Funeral Homes, Johnson.