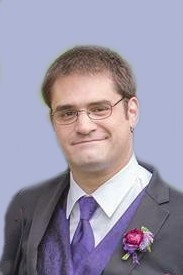 Born in Wheatridge, Colorado on, November 7, 1981, he was the son of Raymond and Susan (Cook) Desrochers. He attended Swanton schools graduating from Missisquoi Valley Union High School in the class of 1999. Since 2011 Adam had been associated as an account manager with Vermont Information Processing in Colchester.

Adam’s passion in life was music, having excelled in in high school as a member of the school band and master singers. At present he and his longtime friend Adam Locke own and operate the Deadlocke music studio in Waterville as well as having his own two bands known as Absolute Zero and Hershniperd.

In addition to his mother Susan (Cook) Desrochers; and his father, Raymond Desrochers and his wife Sandra, Adam leaves his daughter, Hannah (10) the love of his life and his life partner, Ashley Drinkwater all of Swanton; his sister, Jennifer Whittaker and husband Erik of Canton; his maternal grandmother, Rita Cook of Swanton and many aunts, uncles, nieces, nephews, cousins and many friends.

A Celebration of Adam’s life will be held, Saturday, February 11, 2017, at 2 p.m. from The Kidder Memorial Home, 89 Grand Avenue, Swanton. The Reverend Kerry T. Cameron will officiate. Interment will take place at a later date in Mount Calvary Cemetery, St. Albans.

Friends may call, at the funeral home on Saturday from 12 Noon until the hour of the service.

The family request that in lieu of flowers, gifts in Adam’s memory may be made to the, Adam Desrochers Music Scholarship Fund, in care of, Danielle Turner or Aaron Garceau, 100 Thunderbird Drive, Swanton 05488. Checks should be payable to Missisquoi Valley Union High School.

A memory celebration of music, videos, photo and skyping was held for Adam on Saturday evening form 6 to 9 p.m. at the 14th Star Brewery in Saint Albans hosted by Matt Gadouas.

Private on line condolences may be directed to the family by way of: www.kiddermemorialhome.com.